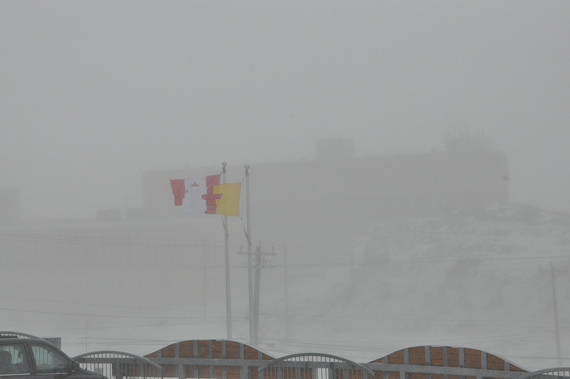 If you’re in a blizzard, such as this recent one in Iqaluit, it means you can’t see for more than 400 metres or a quarter-mile—and sometimes visibility can be even more reduced. (FILE PHOTO)

If you live in Iqaluit, unless you’re a newcomer to Nunavut’s capital city, chances are you’ve gone through a blizzard or two.

A blizzard, says Environment Canada, is a period of at least four hours when winds of 40 kilometres per hour or greater mean you can’t see very far due to blowing snow, or blowing snow in combination with falling snow.

Such blizzards with high winds are most common in the eastern Arctic—and these storms have a knack for coming in around the holidays.

In 1997, a stubborn holiday storm pounded south Baffin for at least two days over New Year’s with driving snow and 100 km/h winds, stranding Iqaluit’s party goers, airline travellers and police alike. The New Year’s Eve bash at the Royal Canadian Legion, finally cut short at just after 11 p.m., proved a nightmare for the few taxi drivers still out at that hour.

But you don’t have to look further than to 2015, when strong winds and blizzard conditions in Iqaluit led to scores of motor vehicle incidents over the holidays, especially on Dec. 26 when police received 19 calls for service.

Such a history of holiday blizzards recently prompted the City of Iqaluit Emergency and Protective Services to re-circulate its storm and blizzard preparedness guide intended to help you stay safe.

The best way to get through a blizzard is to be prepared: “You should be prepared to take care of yourself and your family for a minimum of 72 hours during a blizzard,” the city document says,

In an emergency, you will need some basic supplies to get by without power or tap water. Your goal should be to be self-sufficient for at least 72 hours, it suggests.

And you need to make sure your emergency kit is organized and easy to find.

Your basic emergency kit should include:

• water—at least two litres of water per person per day;

• extra keys to your vehicle and house;

• cash in smaller bills, such as $10 bills, as automated bank machines and their networks may not work during an emergency; and,

• other items such as prescription medication, infant formula, equipment for people with disabilities, or food, water and medication for your pets.

You can read the entire seven-page guide, which has many useful numbers, here.

And there’s also a Facebook page devoted to blizzard announcements for Iqaluit, which you can see here.