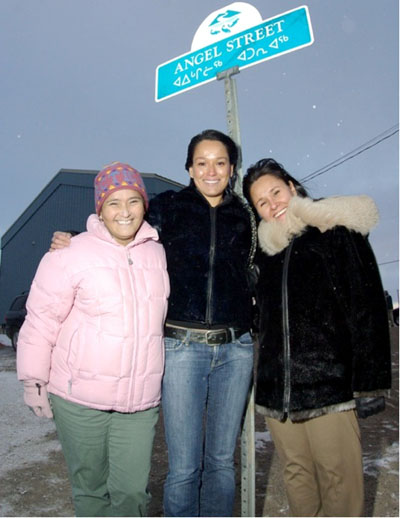 Elisapee Sheutiapik, far left, celebrates the inauguration of Angel Street in Iqaluit during her term as the city’s mayor in 2007 with musician Lucie Idlout and Leona Aglukkaq, current MP for Nunavut. The street, and Sheutiapik’s “Angel Street Project” to raise awareness about domestic abuse, took its name from a Idlout’s song “Lovely Irene,” which was also released as “Angel Street.” (PHOTO COURTESY CITY OF IQALUIT) 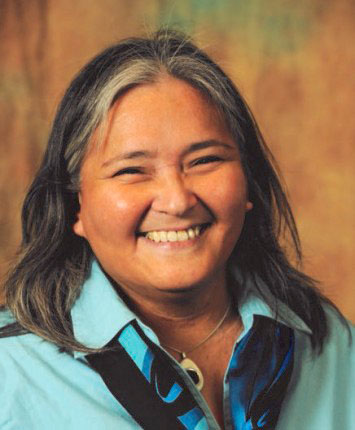 Former Iqaluit mayor Elisapee Sheutiapik has won the Canadian Economic Club’s 2014 Voice of Hope humanitarian award for her past work on the Angel Street Project, a national effort to stop domestic abuse and violence against women. (FILE PHOTO)

It’s been four years since she ended her stint as mayor of Iqaluit, but signs of Elisapee Sheutiapik’s efforts endure, literally, in the names of several city streets, street corners and squares across the country that carry the name “Angel.”

Sheutiapik carried the effort to raise awareness about domestic violence through her Angel Street Project in her later years as mayor, from 2007 to 2010.

The goal: to challenge cities across the country to rename a street “Angel,” in recognition of female victims of violence and to provide moral support for women’s shelters.

At last count in 2011, cities in at least seven provinces and territories had taken up the cause. They include St. John’s, Edmonton, Regina, Fredericton, Yellowknife, and Kamloops, B.C., as well as Sheutiapik’s hometown.

The former mayor’s efforts have echoed loud enough since 2010 to earn Sheutiapik some national recognition of her own. The Economic Club of Canada will celebrate her legacy — and, she hopes, “re-ignite” the Angel Street Project — at its third annual Voice of Hope Gala.

The Ottawa-based non-partisan organization will present Sheutiapik with its 2014 Voice of Hope Award in the nation’s capital, Oct. 20.

Domestic violence “is a central issue that affects everybody, all across the nation,” Natasha Morano, vice president of the Economic Club, told Nunatsiaq News.

The project’s goal — to challenge every city in the country to name a street, square or other location by the name Angel “gives a constant reminder that domestic violence is not going away,” Morano said.

The humanitarian award is not simply a celebration of achievement, she said, but a chance to bring Sheutiapik’s successful project, and the issue of domestic violence back into the spotlight.

“We want to help Elisapee fulfill the ethos of what Angel Street was all about,” Morano said.

“We’ll see if we can get other community leaders to implement some of the work that Elisapee has done. We want to light a fire, and actually keep the flame going.”

The club offers a podium for national and international political and business leaders to speak on policy issues in an open forum, in the Canadian capital.

“I’m very humbled,” Sheutiapik said of the honour. “It’s just rejuvenated my will to make sure [the Angel Street Project] doesn’t die.”

Angel Street had small beginnings in Iqaluit’s city council in April 2007, when Sheutiapik, with Iqaluit city councillors, passed a “zero-tolerance policy” against violence and abusive language in council meetings, the former mayor recalled.

“If a council member was disrespectful, or physically, psychologically, or mentally abusive to someone, and did not remove themselves from council — we would remove them,” she said. “That sent a message to the community — enough violence.”

Violent crime rates in Nunavut are among the highest in the country. Any chance for leaders on any level to take action against violence — be it at the community level, on up to the federal — must not be passed up, she said.

“We are all impacted by violence – by loss, and life lost to violence,” Sheutiapik said. “I myself had a sister, murdered twenty-plus years ago. It’s still unsolved today.”

“If we continue to be quiet about violence, we’re not going to find potential solutions. This is why I am adamant that we talk about it.

“I really think if we’re physically, mentally and emotionally stable, we’re going to contribute to society.”

“After listening to Lucie’s song, she inspired me,” the former mayor said. “I grew up in a generation where you’re not supposed to talk about it. And here is a woman, my goodness, she’s written a song?

“I thought, if she can do that to try to educate and end violence, what can I do? That’s when I took the lyrics of the song. She has ‘Angel Street’ in there.”

The mayor then brought a unique idea to council — a proposal to give that name to the street leading to the city’s shelter for battered women — the Qimaavik home in Apex.

The name would remind women who are in an abusive situation that they can walk away and find refuge at safe havens, she said.

“It’s to name a street, to help support shelters, and to remind women that they don’t have to be in an abusive relationship,” she said.

Sheutiapik resigned her position as mayor at the end of 2010 to spend more time with family, she said.

She continued to promote the project the following year, while serving as president of Pauktuutit, Canada’s national Inuit women’s organization. St. John’s, Newfoundland, was the last city to take part, when it gave the name “Angel Corner” to a small sitting space in the downtown area.

Although she has lived in Ottawa since the start of this year, where she moved to work for First Air, Sheutapik still considers Iqaluit home, and visits often.

The award has “re-ignited my will to ensure this project continues,” she told Nunatsiaq News, Oct. 16.

“I will somehow make sure that I put something in place, or create an organization or society to keep this project alive,” she promised.

The Economic Club of Canada will present its 2014 Voice of Hope Humanitarian Award to Sheutiapik at its third annual Voice of Hope Gala at the Chateau Fairmont Hotel in Ottawa, Monday evening, Oct. 20.