“I want the kids to enjoy the game, and have fun” 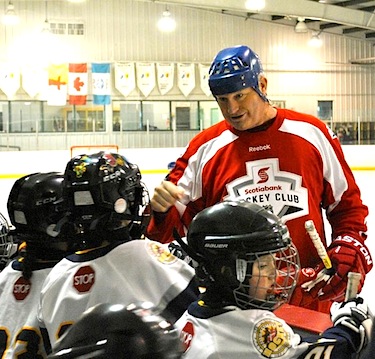 Former NHLer Marty McSorely chats a team of Iqaluit “mites” players, aged four to seven, in a break during a hockey game at the Arctic Winter Games Arena, March 28. (PHOTO BY PETER VARGA) 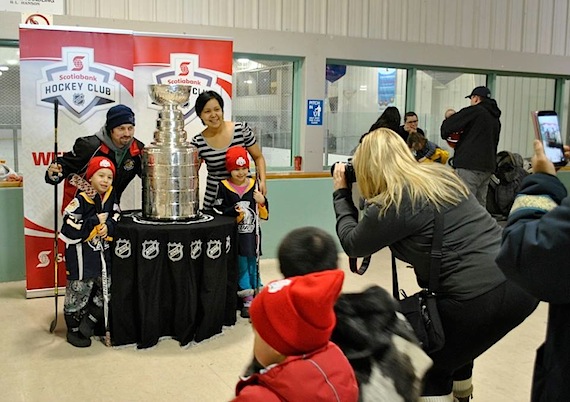 Kids, families and hockey fans of all ages lined up to pose with the Stanley Cup at the Arctic Winter Games Arena in Iqaluit, March 28, where Scotiabank put on a “celebration of hockey” event. (PHOTO BY PETER VARGA)

Iqaluit got a special visit, March 27, from two former National Hockey League players, and the ultimate big league prize they both won in their professional careers — the Stanley Cup.

John LeClair, who won the award as a member of the Montreal Canadiens in 1993, and Marty McSorley, winner with Edmonton Oilers in 1987 and 1988, were guests of honour in a “celebration of hockey” event hosted by Scotiabank at the Arctic Winter Games Arena.

Scotiabank, which sponsors more than 5,000 amateur hockey teams across the country, brought the two former big league players first to Kuujjuaq, and then to Iqaluit for a charity game on Friday evening, and special sessions with minor hockey coaches and players the next day.

Friday’s charity game raised some $16,200 for the Iqaluit soup kitchen and YWCA Agvvik Nunavut’s women’s shelter. Players from Iqaluit mens’ leagues grouped into two teams, headed up by coach McSorley and coach LeClair behind the benches — for a friendly match-up that raised $1,200 from admission and donations. Scotiabank, First Air airlines, and the Qikiqtaaluk Corp. added donations of $5,000 each.

Even with LeClair and McSorley behind the benches, and Nunavut MP Leona Aglukkaq and Premier Taptuna looking on, it was obvious the main attraction for Iqalungmiut was the Stanley Cup — not former NHLers or political leaders.

“People the think we travel with a replica,” said Mike Bolt, keeper of the cup for the Hockey Hall of Fame. “We don’t. The official one is the one that travels, ‘the presentation,’ as we like to call it.”

“Scotiabank used their partnership with the league [NHL] to make this all happen,” Bolt said. First Air transported the players, organizers and the cup up to Iqaluit from Montreal via Kuujjuaq, where Scotiabank also put the cup on display, and coordinated a donation of hockey equipment for kids.

Northern Canada, particularly Nunavut, “is not a part of the world we get to very often, that’s for sure,” said Bolt, adding that the Iqaluit event marked the cup’s first time in the city, and its second appearance in Nunavut at large.

Kids, families and hockey fans of all ages lined up at the AWG arena to pose for a photo with Canadian and American professional hockey’s ultimate trophy.

“To see people’s eyes light up when they’re around it — it’s not unlike how I felt the first time I saw it,” said McSorley. “It still gives you goose bumps when you’re around it.”

McSorley won the cup twice as an Edmonton Oiler, where part of his role was to protect teammate Wayne Gretzky. Hockey fans old enough to remember will recall that McSorley had a second chance at winning hockey’s ultimate prize in 1993, again with Gretzky, but as a Los Angeles King.

LeClair was a member of the Montreal Canadiens team that beat McSorley and Gretzky’s Kings in that year’s dramatic final series. It was the one and only time Leclair would hoist the Stanley Cup in his career as a player.

The Scotiabank charity game in Iqaluit went to Team McSorley, 6-4.

“It was close,” Leclair told Nunatsiaq News. “We were in the game the whole time.”

“It was mostly joking,” he added. “There was not a whole lot of coaching going on, on my end. I can’t speak for Marty, but on my end there wasn’t.”

LeClair and McSorley took to the ice the next day, when they lent a hand to Iqaluit Minor Hockey Association coaches and their players, from the youngest “mites” to preteen kids at the peewee level.

“Their intentions are in the right spot, and that’s half the battle,” LeClair said of the coaches.

Speaking of the kids, “it kind of takes you back to when you were this age, playing,” he said after an on-ice session with Iqaluit mites, aged three to seven.

“Hockey’s a game, it’s fun and that’s the way it should be. And you could see these kids are having fun out here.”

“I want the kids to enjoy the game, and have fun,” McSorley agreed. “I think it’s a great learning tool for the kids too, for hard work, and being unselfish, and being part of a team.

“And I get a chance to put my skates on too — it’s what I’ve always loved to do.” 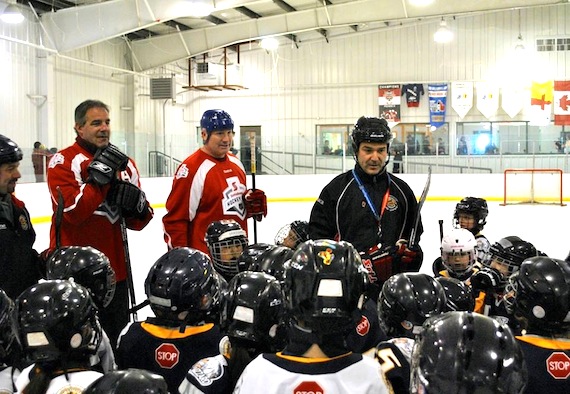