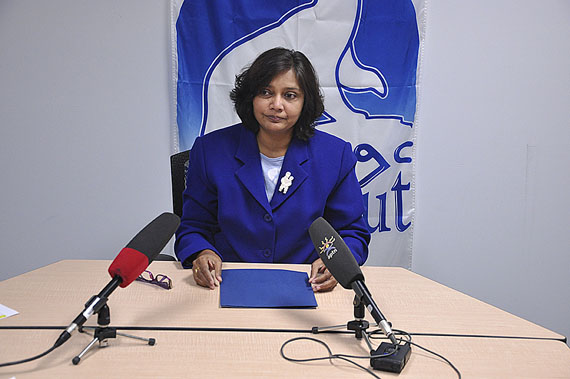 Padma Suramala, Nunavut’s former chief coroner, is suing the Government of Nunavut for wrongful dismissal. She is seen here at an October 2014 news conference held at her Iqaluit office. (FILE PHOTO

Nunavut’s former chief coroner is suing the Government of Nunavut for wrongful dismissal.

The Department of Justice fired Padma Suramala on April 25, according to an 11-page statement of claim filed at the Nunavut Court of Justice on June 22.

Suramala had been Nunavut’s chief coroner since 2010.

Before that, she had been a coroner for the GN since 2008, while also working as a nurse in Iqaluit.

She began working in Iqaluit in 2007, and previously worked as a nurse for two years in Cambridge Bay.

Suramala alleges that the GN was “unfair, malicious, unethical, unlawful, high-handed, arbitrary and callous” towards her both during her employment and her dismissal, the statement says.

She’s suing for more than $1 million in damages.

Nunavut’s chief coroner is responsible for investigating deaths that could be deemed preventable, and for providing reports on how to avoid breaches to public safety within the government.

To make sure the public can trust a chief coroner’s word, Suramala’s claim said she required a lot of independence and autonomy in her role.

Yet the statement of claim includes a string of examples where Suramala said her work was censored and she was kept from doing her job properly.

These allegations all route back to decisions made by the deputy minister of justice, William McKay.

These include the withholding of a report on domestic violence in Nunavut that McKay “expressly prohibited the chief coroner from releasing,” the statement of claim alleges.

That public report lists 15 risk factors for intimate partner homicide-suicide, along with prevention and safety recommendations that Suramala made as chief coroner, following a general review of domestic violence in Nunavut that she spearheaded after a murder-suicide in Iqaluit in the spring of 2011.

Iqaluit-Manirajak MLA Adam Lightstone tabled this report in the Nunavut legislature on June 7.

McKay also rejected the findings of a coroner’s report he received from Suramala in December that said a GN employee committed suicide while on suspension from work, the claim alleges, adding that McKay called the death accidental.

“He did not accept the chief coroner’s finding that the cause of death was suicide,” according to the statement of claim.

In 2016, McKay also dismissed an audit of Nunavut’s chief coroner’s office carried out by an Ontario chief coroner following an inquest into the death of a child. He said the report was “full of complaints,” according to the statement of claim.

When a Pond Inlet man died in March after a police-related shooting, the Department of Justice also sided with the Ottawa police when external investigators “actively prevented” her from attending the death scene, Suramala alleges.

“The Ottawa police prevented her from informing the family of the deceased about the cause of death after the autopsy,” the claim said.

But when McKay sent her an email with the notice of suspension on February 5, there were two reasons given for her suspension. Those were “outside activity” related to work she did at the Iqaluit women’s shelter and accessing health files without a warrant.

This was after Suramla asked for the patient files of a person who had died suddenly at the health centre in Qikiqtarjuaq in January.

During this time, Suramala and the coroner’s legal counsel, Sheldon Toner, were working to sort out a dispute with the GN over the chief coroner’s access to health files without a warrant.

“Senior managers and politicians should not unduly influence the coroner’s findings including recommendations as outlined in the act,” the audit also states.

That same audit called the workload of Nunavut’s chief coroner “unsustainable,” because the job required work that would usually be done by community coroners.

Suramala also says she suffers from post-traumatic stress disorder connected to a plane crash in Resolute Bay in 2011 where Suramala “was responsible for the grisly task of collecting body parts from the crash site and identifying the deceased in the autopsy,” the claim states.

At the time of suspension, Suramala was told that her suspension and investigation was “non-disciplinary.”

According to the GN, this meant she wasn’t allowed to have her lawyer, Gillian Bourke, take part in a fact-finding interview held about her employment, though the GN did bring a lawyer to that meeting, the claim states.

Suramala was also allegedly locked out of her GN email, so she couldn’t access documents that would help her defend herself.

The statement also says that the GN gave no signs of “progressive discipline” before ending her employment, and did not make sure that Suramala knew there was a problem that could lead to dismissal.

Suramala is suing for $200,000 for harassment, negligence, intimidation and conspiracy to interfere with her work, $400,000 for dismissal and unfair dealings, $300,000 for defamation and mental stress, $150,000 for punitive damages and an amount for special damages that would be considered at trial.

None of these allegations have been proven in court. The GN has 25 days from the time it received the claim to file a statement of defence.