Samuel Nuqingaq pleads guilty to one charge, other charge is stayed 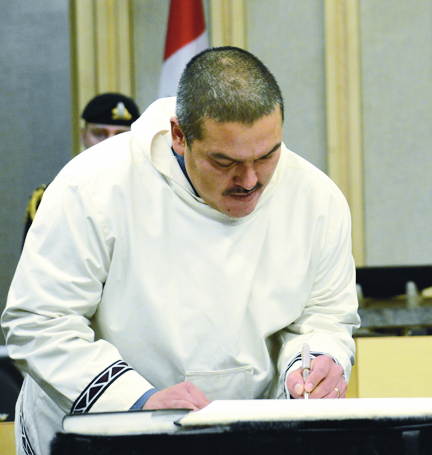 Samuel Nuqingaq signs his oath of office Nov. 19, 2013, as the official member for Uqqummiut. The disgraced MLA pleaded guilty Oct. 29 in Qikiqtarjuaq to being unlawfully in a dwelling house. The Crown stayed a charge of assault. (FILE PHOTO)

The former MLA for Uqqummiut, Samuel Nuqingaq, pleaded guilty to being unlawfully in a dwelling house in Qikiqtarjuaq at a court appearance Oct. 29 — and Justice Bonnie Tulloch handed him a conditional discharge.

Crown Prosecutor Ivan Nault, who prosecuted the case, said the Crown accepted the guilty plea on that charge and stayed a second charge of assault.

A stay effectively means the charge of assault is dropped. And, under a conditional discharge — as long as he abides by the conditions set by the court — Nuqingaq will not have a criminal record.

The conditions include a 12-month probation period and 50 hours of community service, Nault said.

The prosecutor added that Nuqingaq made a statement to the court during proceedings, but Nault did not record that statement.

The charges against Nuqingaq stemmed from a February 2014 incident in Qikiqtarjuaq involving a man named Tony Alan Aulaqiaq.

In its Nuqingaq submission to Justice Tulloch, the Crown recommended a suspended sentence for Nuqingaq which is similar to a conditional discharge but with one crucial distinction: the accused is left with a criminal record.

Tulloch opted for the conditional discharge instead.

Nuqingaq faced public disgrace in October 2014 when his legislative colleagues unanimously expelled him from the house for repeated “unacceptable conduct” and absences from legislative sittings, committee and caucus meetings.

That expulsion followed several previous suspensions handed down by the assembly for the same reasons.

Nuqingaq admitted that during one suspension, he had gone south for counselling but did not provide details of that treatment.