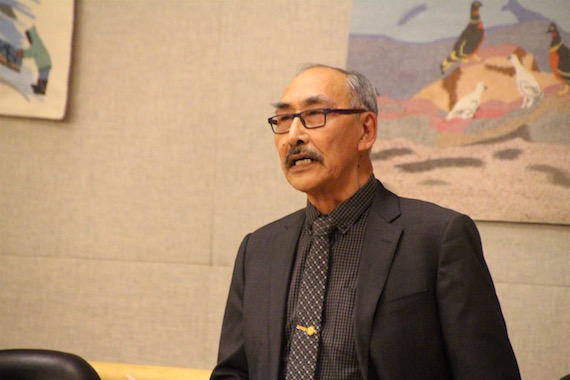 Paul Quassa gives his first member’s statement as a regular member in the Nunavut legislature since his removal from the position of premier last June. (PHOTO BY BETH BROWN)

Aggu MLA Paul Quassa, who served as Nunavut’s premier until last June, used his first member’s statement in the fall sitting of the territorial assembly to say he’s staying on as MLA.

“I want to take this opportunity today to clearly and publicly assure my constituents of Aggu that I’m not going anywhere,” Quassa said on Tuesday, Oct. 23, the first day of the three-week sitting.

Quassa said he plans to focus on his constituents’ priorities and those of the territory for the remainder of his term.

He flagged infrastructure, housing and economic development as the key issues that affect Igloolik and other Nunavut communities.

“I look forward to working with my colleagues in my new role to effectively raise and address them in this house,” he said.

Quassa, elected in November 2017, was removed from the position of premier this past June in a non-confidence vote.

“The past four months have provided time in which to reflect,” said Quassa, who thanked his constituents for reaching out to him over that period.

“It is often said that there are both ups and downs in public life. I believe that I can safely say that I speak from experience on this matter,” he said.

“Nobody who chooses to enter public life should be under any illusions. There can be difficult moments. It is how we face those moments that matters.”

Prior to his eight months as premier, Quassa, a signatory of the Nunavut Agreement and a former president of Nunavut Tunngavik Inc., served as education minister in the fourth legislative assembly, where he championed efforts to amend Nunavut’s Education Act and the Inuit Language Protection Act.

At the time of Quassa’s removal, MLAs cited an “autocratic leadership style,” and “mismanagement” as among the reasons for his removal.

During Tuesday’s oral question period, Quassa got right to work, pressing Pat Angnakak, Nunavut’s minister responsible for the Nunavut Housing Corp., for information about an ongoing review of how housing is allocated.

“I want to thank members for the collegial way in which I have been welcomed,” he said from his new seat on the opposite side of the assembly chamber. He called this welcome “a reflection of the strength of a non-partisan institution.”