Centre would lead to repatriation of Inuit artifacts 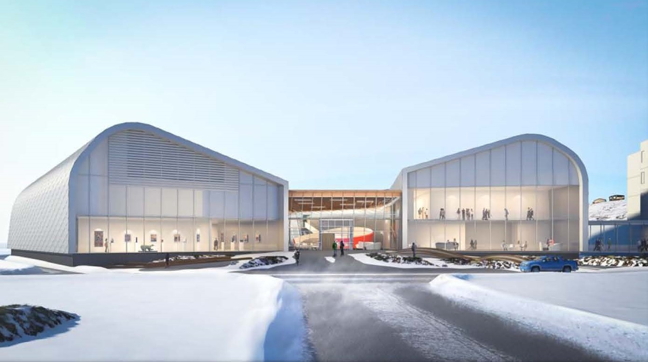 This is an artist’s rendition of how the proposed Nunavut Heritage Centre would look. (FILE PHOTO) Eva Aariak, who chairs the Inuit Heritage Trust, appears at the Nunavut Tunngavik Inc. annual general meeting in Cambridge Bay to talk about the territorial heritage centre that she and others want for Nunavut. (PHOTO BY JANE GEORGE)

CAMBRIDGE BAY—Eva Aariak, the territory’s second premier and the current president of the Inuit Heritage Trust, made a big pitch for construction of a Nunavut heritage centre when she appeared at NTI’s annual general meeting Oct. 25 in Cambridge Bay.

During her presentation, which delegates followed on their iPads—following the AGM’s commitment to a paperless meeting—Aariak said a territorial heritage centre would instil a sense of pride in Nunavummiut.

Displaying things made by Inuit in the past would help fulfill the educational, cultural and spiritual needs of today’s Inuit, she said.

“It makes you feel proud,” Aariak said. “Just by looking at them, you know we had very skilled ancestors and we don’t want to lose them.”

Aariak chided governments for their lack of financial support for a heritage centre in Nunavut, which is the only jurisdiction in Canada to lack such a facility.

She also brought up the commitment made in 1993 in Article 33.2.4 of the Nunavut Agreement, on the establishment of heritage facilities in Nunavut, which states, “there is an urgent need to establish facilities in the Nunavut Settlement Area for the conservation and management of a representative portion of the archaeological record.”

How much money has been spent on dedicated facilities in Nunavut to showcase Nunavut history was a question Aariak put to the NTI delegates.

And then, to make her point, Aariak asked how much is spent to store these artifacts outside Nunavut.

Until recently, Nunavut artwork and artifacts were stored at the Prince of Wales Northern Heritage Centre in Yellowknife.

But last year, the Nunavut government worked out partnership arrangements to transfer 8,000 artifacts to the Winnipeg Art Gallery and sent others to the Canadian Museum of Nature’s collections facility near Ottawa.

The Inuit Heritage Trust, which has worked with Qikiqtaaluk Corp. since 2014 on the heritage centre project, wants to bring those collections home and see them housed in a centre built on Inuit-owned land in Iqaluit.

The heritage centre has been in the works since 2001—and in 2009, when Aariak was premier, the Government of Nunavut committed to the project.

But in 2011, the GN decided to shelve plans to build it due to other government infrastructure priorities, such as housing, health centres, airports and schools, community halls and fuel tank farms.

Of the $10 million which had been budgeted to advance with the centre, $3 million had gone to planning and design and a consultant who received $200,000 to source out funds for a heritage centre.

So, the $7 million left was redirected to other GN projects.

At that time, the heritage centre proposal called for a 6,700-square-metre heritage centre with exhibit and archive spaces, studios and an auditorium, and came with a $120-million price-tag.

Since then, the Qaggiavuut Society has moved ahead with its drive for a dedicated performing arts centre, also in Iqaluit.

Now the cost would come in between $70 and $90 million, Aariak said.

QIA President P.J. Akeegok said he planned to introduce a resolution to support the heritage centre project, so that Inuit will be able to see the artifacts “in our own light.”