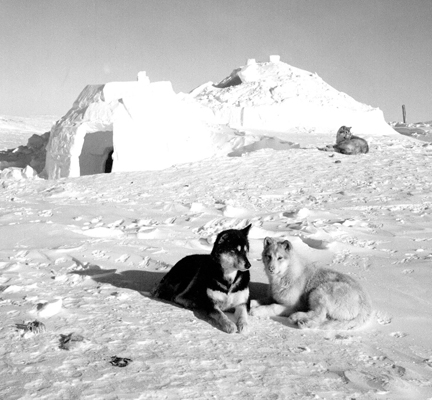 Sled dogs relax in front of an igloo in 1950 near the present-day community of Inukjuak. (PHOTO BY MARGERY HINDS, MH-01, COURTESY OF AVATAQ CULTURAL INSTITUTE)

Some former sled dog owners in Nunavik have received payment for the loss of their dogs in the 1950s and 1960s.

The cheques came nearly a year after Nunavik’s Makivik Corp. and the province of Quebec signed an agreement to recognize the dog slaughters and their impact on the Inuit culture and way of life.

In acknowledging the slaughter of hundreds of Inuit sled dogs, Quebec provided $3 million to Makivik to protect and promote the Inuit language and culture and to provide plaques to commemorate the dog slaughter in each of Nunavik’s 14 villages.

In late May, 145 Nunavimmiut, who had either owned a sled dog team or whose spouse had owned a team, received $6,700 each from a Qimmiit trust set up by Makivik to receive and distribute the $3 million.

Of the estimated 526 former dog owners, these were the first to receive compensation because they are elderly, Makivik vice-president Michael Gordon said in a recent interview.

Six others, who had lost only one dog, received less money, he said.

The descendants of dog team owners who are no longer living — a total of 381 — will receive similar amounts, but the money will be divided up among them, Gordon said.

The members of the Makivik board of directors discussed at length how to distribute the money, finally opting for individual compensation payments, he said.

The money for sled dogs flowed from a 2010 report by Jean-Jacques Croteau, a retired Quebec superior court judge, who was mandated by Quebec in 2007 to look into allegations of dog slaughters in the 1950s and 1960s.

The whole of Nunavik society suffered the damaging consequences of the actions, attitudes and mistakes of bureaucrats, agents and representatives of the federal and provincial governments, who killed at least 1,000 dogs in Nunavik during those years, Croteau found.

The federal and provincial governments owe compensation and an apology to the Inuit of Nunavik, Croteau said.

Croteau suggested the money should be divided up among non-profit Inuit corporations to pay for the promotion of Inuit art, culture and language, as well as to organize dog sled races, such as the annual Ivakkak race.

Some have criticized the way the compensation has been distributed.

A woman, who did not wish to be identified, told Nunatsiaq News that some people who received money did not own dog teams when the dogs were killed: “they may have had one or two dogs as pet, not as dog team.”

“I feel it is very wrong to compensate people who didn’t have dog team at the time of dog slaughter,” she said.

Others were not included on the list, she claimed, saying “there were women who had two dogs who used those as backpackers in summer/fall/winter and to get wood for their stove, and they were not on the list.”