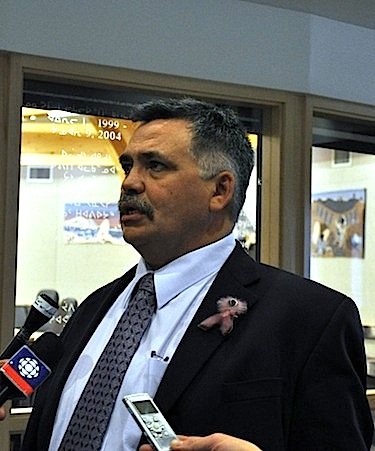 Community and Government Services Minister Lorne Kusugak says Resolute Bay’s supply of gasoline will be adequate until its next annual resupply. The community’s fuel tank farm leaked up to 100,000 litres of fuel Oct. 28 after police say someone opened one of the tank’s valves. (PHOTO BY SARAH ROGERS)

The Oct. 28 leak at the Resolute Bay tank farm was likely a deliberate act, the Nunavut RCMP said Oct. 31.

“It looks like someone opened the valves,” said RCMP spokesman Sgt. Kevin Lewis Oct. 31. “But as it stands, we have no suspects and we’re still investigating.”

RCMP launched an investigation Oct. 28 after an estimated 100,000 litres of fuel spilled from the community’s fuel tank.

A full clean-up effort got underway Oct. 29, when workers from the petroleum products division of Nunavut’s Community and Government Services department arrived in Resolute Bay to contain the spill.

CGS Minister Lorne Kusugak visited the site while in Resolute Bay Oct. 29 to attend a ceremony for the opening of the community’s new arena.

The spill has been contained in a rubber lined fuel berm, Kusugak said.

“I was expecting to see a swimming pool of gasoline, but what you see is a pool of snow with a yellow stain,” he told Nunatsiaq News. “The spill is not going beyond the fuel tank area.”

But Kusugak said work on cleaning up the spilled fuel has just begun, and crews are still figuring out how to remove the fuel from the area.

“They don’t have an answer to that yet, but we’re looking at what we need to do,” he said. “Our department will be taking the lead.”

After a closer look, crews estimate that anywhere between 75,000 to 100,000 litres of fuel were leaked, Kusugak said, roughly 25 per cent of the community’s fuel supply.

Although it’s a large amount, Kusugak said the community’s fuel supplies should last until next year’s sealift.

“As of now, we’re very confident that the fuel supply will be adequate to carry the community until the next sealift season,” he said. “If they run low, it wouldn’t be by that much.”

In a GN press release Oct. 28, Kusugak said his department will ensure Resolute Bay will get an adequate supply of fuel between now and next year’s resupply.