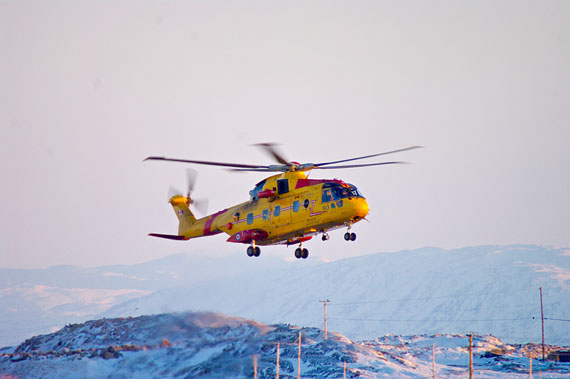 A armed forces Cormorant search and rescue helicopter lands in Iqaluit March 29. As of late afternoon March 30, aerial and ground searchers have not been able to find Nunavut MLA Pauloosie Keyootak and two companions, one of whom is his son. The group departed Iqaluit for Pangnirtung March 22. The search began March 27 after they were reported ovedue on March 26. (@FrankReardon1 PHOTO)

Search and rescue crews came up empty-handed at the end of their fourth day looking for Uqqummiut MLA Pauloosie Keyootak and his two fellow companions, who have been missing for over a week somewhere between Iqaluit and Pangnirtung.

Keyootak, 62, is a former president of the Qikiqtani Inuit Association and was elected as Uqqummiut’s new MLA in a by-election February 2015.

The trio hoped to reach Pangnirtung, roughly 300 kilometres away by snowmobile trail, sometime in the middle of the night. The snowmobilers planned to break there before continuing on to their hometown of Qikiqtarjuaq, another 200 kilometres away.

But the group never made it to Pangnirtung.

When the men hadn’t arrived in Pangnirtung by March 24, family members reported them overdue. Search and rescue efforts began March 27 from both Iqaluit and Pangnirtung.

The following day, Joint Rescue Coordination Centre in Halifax dispatched a Hercules aircraft to search the area, and later a Cormorant helicopter.

The JRCC dispatched a second Hercules and Cormorant March 30 to allow the other aircraft crew to rest after a nighttime search.

Keyootak, his son and Kakkee are considered experienced on the land. The men’s snowmobiles pulled a qamutik with fuel and other supplies, family members said, but no GPS device.

“They only had four or five jerry cans,” a family member told Nunatsiaq News March 30. “I’m just hoping that they’re warm. It’s freezing out there.”

But conditions remain mostly clear between Iqaluit and Pangnirtung, with Environment Canada forecasting sunshine and temperatures around -20C for the next few days.

Anyone who might have spoken to Keyootak about his travel plans or has information about his location should also call 975-7900.