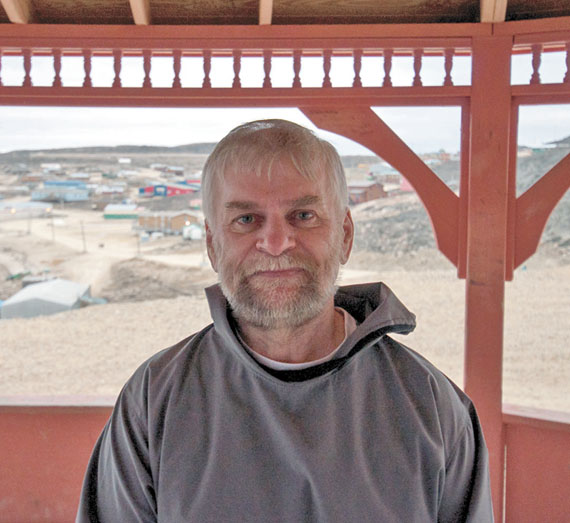 Fred Schell, the former MLA for South Baffin, says that for Nutrition North Canada to work, retailers must disclose the freight rates they actually pay and must disclose their profit margins on subsidized items. (FILE PHOTO)

The Nunavut MLA who was instrumental in prompting the Auditor General of Canada to examine the shortcomings of the Nutrition North subsidy says the program will never be fixed until retailers are forced to show exactly what they pay for freight.

Fred Schell, now an ex-MLA living in Cape Dorset, said Nov. 25 that he’s pleased the auditor general came to the same conclusion as most northerners — namely that there’s no proof retailers are passing on their entire federal subsidy to help customers save money on healthy food.

In fact, Schell thinks they’re using it to improve profit margins, and since retailers are not obliged to disclose how, exactly, they determine their profit margin, there’s no way of knowing.

“You can hide profits so easily. I mean, you can put all kinds of costs in there. You’d never know the true cost for them to operate up north,” Schell said.

“The whole purpose of this thing is to help people who can’t afford to buy food.”

A long-time critic of Nutrition North, mostly because of its lack of transparency and oversight, Schell brought forward a motion in the legislature in May 2013 calling on the Office of the Auditor General of Canada to undertake a formal audit of the program.

“Take this program out of the hands of retailers… give it to the families,” he said then, after which his colleagues voted unanimously to send the motion to the OAG.

Nutrition North, which replaced the old Food Mail subsidy program, came into effect in April 2011. Through the program, retailers in 103 isolated and northern communities are eligible for a range of freight subsidies based on the cost of shipping food there.

Its annual subsidy budget of about $54 million was recently increased by $11.3 million for the 2014-2015 year, with a five-per-cent “compound escalator” for future years.

The one most critics have focused on deals with proving that the entire subsidy is used to lower the price of certain healthy foods identified by Aboriginal Affairs and Northern Development Canada, the department that oversees the program.

“In our opinion, determining whether the entire amount of the subsidy is being deducted from the selling price of a food item requires an examination of profit margins (both current and over time),” the report says.

“The impact of the subsidy may be negated if the profit margin is increased after the full subsidy is applied to the landed cost.”

In other words, a retailer could effectively eat up part or all of that subsidy by claiming expenses such as operation costs, food spoilage, labour and utilities.

And until AANDC insists on scrutinizing that profit equation, Schell said, the program will never live up to its goal of making nutritious food as affordable as it can be for northerners struggling to feed their families.

Especially since we don’t know what freight deals retailers have negotiated privately with the airlines, Schell said.

“The only way this will ever be worked out is that the government, through this Nutrition North program, has to find out exactly how much they’re paying the airlines,” said Schell.

“If their argument is, ‘well, we’re a private business, we don’t have to show you our books,’ well then, you don’t have to get the subsidy. Simple as that.”

He said full disclosure of those audited internal costs should have been part of the deal when the program was set up.

They need not disclose that proprietary information publicly, Schell added, but they should be obliged, at the very least, to show that information to the federal government which hands out the subsidy.

“Inuit were not afforded the opportunity to participate in the redesign of the program,” Towtongie said in a Nov. 25 news release. “This means that the Inuit right to participate in shaping this program and its design has not happened.”

She added that NTI would raise the issue with AANDC Minister Bernard Valcourt at their next meeting.

The organization that represents all Inuit in Canada, Inuit Tapiriit Kanatami, urged the federal government to take the auditor’s report seriously and address the discrepancy between northern and southern families.

ITK just released a report outlining factors that continue to impair Inuit health and one of them was food security.

The Western Arctic’s NDP MP, Dennis Bevington, took aim at funding Nov. 25, saying at a press conference that the Conservative government doesn’t spend enough on the NNC to meet the needs of northerners.

He pointed out that within the total $60 million annual budget for NNC, $6 million was spent on administration.

“For these 103 communities, which is not a large number, their administrative costs are over $6 million a year on this program. So where’s the work being done?”