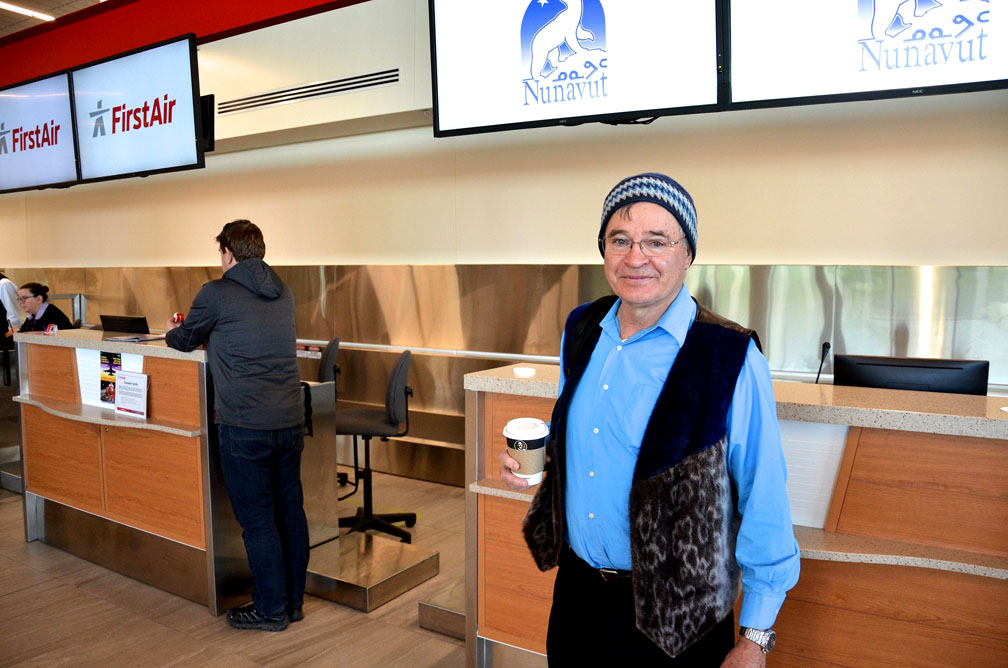 It’s unlikely that the federal government’s plans to legalize recreational cannabis use in Canada will be implemented before this fall, says Nunavut Senator Dennis Patterson.

And unless Ottawa agrees to fund substance abuse treatment centres in Nunavut, Patterson says he will not vote for the bill.

Patterson spoke to Nunatsiaq News in Iqaluit on March 19, after the final leg of a Nunavut-wide consultation tour that included discussion of the Cannabis Act, also known as Bill C-45.

If passed, Bill C-45 would fulfill a key campaign promise by Prime Minister Justin Trudeau and legalize the sale and possession of recreational cannabis with a proposed implementation date of July 1, 2018.

But that deadline has all but vanished amid increased scrutiny of the bill driven by the Senate’s 33-member caucus of Conservative-appointed senators.

“I will be trying to get iron-clad commitments from Canada to work with the [Government of Nunavut] to fund the capital and operating costs of treatment facilities in Nunavut, alongside the implementation of the bill,” Patterson said.

“I’ll vote against the bill unless there’s a commitment.”

Bill C-45 successfully passed to its second reading in the Senate March 22.

But prior to the vote there was concern among Independents and Senate Liberals over whether they had enough votes to save the bill, Global News reported.

Patterson said his public tour through the territory revealed similar concerns from many Nunavut residents on the Cannabis Act as it is currently proposed, although he also admitted that others are in favour of the new legislation.

“A lot of people talked about negative mental health impacts, especially on youth,” he said, adding that youth between the ages of 12 and 17 caught with five grams or less of marijuana do not receive criminal charges under Bill C-45.

“That’s what everyone was saying, that it sends a signal to youth that it’s OK [to use cannabis].”

Patterson said it is likely that the Senate will propose amendments to Bill C-45, which will be sent back to the House of Commons for consideration this June.

From there, it will be up to the prime minister to decide if he wants to extend Parliament’s current sitting to finalize the bill by this summer, or reconvene as scheduled during the fall to pass the bill.

Either way, an extended rollout period for cannabis legalization in Canada’s provincial and territorial jurisdictions would likely prevent the law from coming into force before September, Patterson said.

“In either event, the bill will not come into force on July 1, and it could well be delayed until the fall,” he said.

Some of those amendments include revisiting the proposed penalties for youth caught with five grams of marijuana or less, product packaging that includes health warnings, and a mandated review of the bill’s societal impacts after a defined period.

Patterson said Nunavummiut attending his consultations said they want guarantees that revenue generated from cannabis sales will be directed to wellness, treatment and other programs.

Currently profits for cannabis sales will be split, with 75 per cent going to the provincial or territorial government, and 25 per cent to the federal government.

“We have to get treatment centres and community wellness programs and many people [at the consultations] said [they want] recreation facilities for youth out of this money that’s going to be raised from the sale of marijuana,” he said.

Patterson added that Nunavut mayors and hamlet councils he consulted have all raised concerns about effective impairment testing for heavy equipment operators, including those who work at Nunavut mines.

And Patterson said he is pushing for the Government of Nunavut, through the Nunavut Housing Corp., to impose a ban on growing cannabis plants inside social housing units.

Bill C-45 would allow people to grow up to four plants per household, but that rule can be adjusted by territorial regulations.

A full report on the findings of his Nunavut tour will be presented to the Senate’s Aboriginal Peoples committee in the coming weeks.

The Senate’s aboriginal peoples, national defence, legal and constitutional affairs, and foreign affairs committees are all scheduled to submit their respective reports on Bill C-45 by May 1.

At that point, it will be up to the Senate’s social affairs, science and technology committee to compile and present a consolidated report on the legislation by June 1.