“The ideal is to get an Inuit judge, and why not?” says Bev Browne 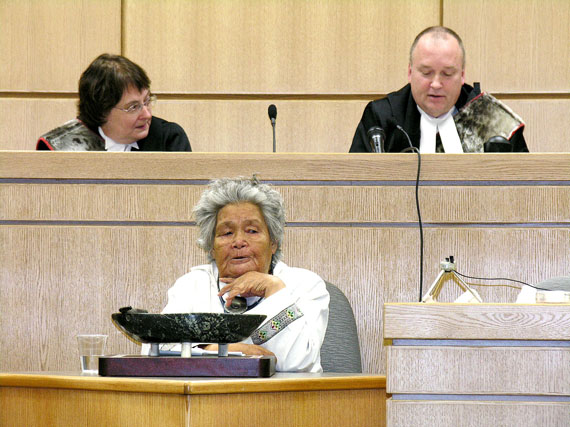 Beverly Browne with Justice Robert Kilpatrick at a Nunavut Court of Justice send-off for Browne on Sept. 25, 2009, before she left the territory for Edmonton and Alberta’s Court of Queen’s Bench. Inuapik Sageeatok of Iqaluit was also at the ceremony to light the qulliq. (FILE PHOTO)

Nunavut’s first senior judge, Beverly Browne, accomplished many things in her two decades living in Iqaluit and working in the justice system, but one of them might surprise you.

Browne built a functioning criminal and civil court system from scratch after being sworn in as senior judge at midnight on April 1, 1999, when Nunavut became a new territory.

During her career, Browne’s colleagues applauded her efforts to integrate elders and Inuit cultural knowledge into the slow-to-adapt criminal justice system.

But that’s not all. Browne recently told Nunatsiaq News that, for a few hours, she was actually in charge of the territory.

“That’s an interesting story. I was sworn in at midnight on April 1, 1999, and the premier and government weren’t sworn in until 3 p.m. that day.

“So for those hours, I was actually in charge of Nunavut,” Browne said with a laugh in an interview that took place in judge’s chambers at the Nunavut Court of Justice in Iqaluit.

But when Browne ended her 19-year Nunavut career in 2009 by taking a seat on the Court of Queen’s Bench of Alberta, it was her down-to-earth community involvement that Nunavummiut spoke about.

Today, Browne returns periodically to Nunavut to fill in as a deputy judge. It was during a recent visit in May that Browne sat down with Nunatsiaq News to talk about the past, and future, of justice in Nunavut.

Browne spoke about a number of Inuit legal professionals who inspired and helped her, including Judge James Igloliorte of Labrador.

The Newfoundland-Labrador government was “way ahead of its time,” Browne said, because they put Igloliorte through law school and immediately hired him as a judge.

Igloliorte would go on to become the commissioner of the Qikiqtani Truth Commission.

“He was one of my role models in terms of what you do when you come to Nunavut from the South, and in terms of figuring out what the justice system should look like.”

Igloliorte also taught at the Akitsiraq Law School in Iqaluit, a law program that produced 11 graduates in 2005 and with which Browne was heavily involved during her time on the Nunavut bench.

“I’m proud of all of the graduates of Akitsiraq, of all the things they’re doing to benefit Nunavut today,” Browne said.

Browne defended the program against critics who say too few of the graduates chose to practice criminal law.

“I think we have to be careful of our expectations because when you look at law schools down south, people are doing all kinds of things like policy work, politics —not just criminal court.”

Browne said she was not involved in a 2010 attempt to resurrect a Nunavut law school, an attempt that failed because the Government of Nunavut refused to foot the bill.

Nor is Browne involved in the GN’s plans to start up a Nunavut law program again in 2017.

But Browne said she welcomed the law school’s next instalment, because education in general, and the training of Inuit lawyers in particular, is going to shape the future of Nunavut.

And having Inuktitut-speaking lawyers helping Inuit can only improve the justice system, Browne said.

“I can’t focus enough on language. When people are speaking about emotional issues, it’s a different story in English than in Inuktitut. Court workers and interpreters, they do a great job, but that’s a band-aid solution to make it work,” she said.

“The ideal is to get an Inuit judge, and why not? Akitsiraq grads have been out of school for 10 years now.”

The Canadian Criminal Code might not be a perfect fit for Nunavut, Browne added, but Inuit lawyers will improve that fit.

“We’re going to be dealing with this system of justice for a long time in Nunavut, but we can make it as sensitive and appropriate to the community and culture as possible within the parameters of Canada’s law.”