Get your vote on: what you need to know on election day in Nunavut 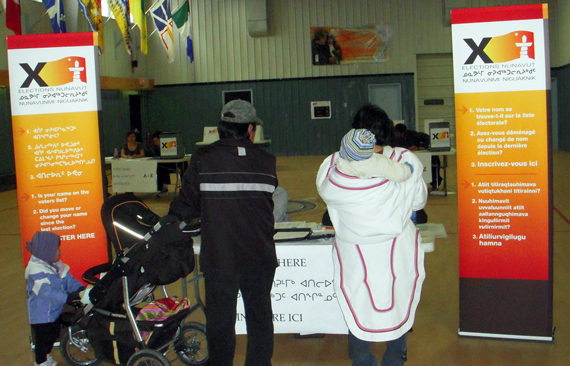 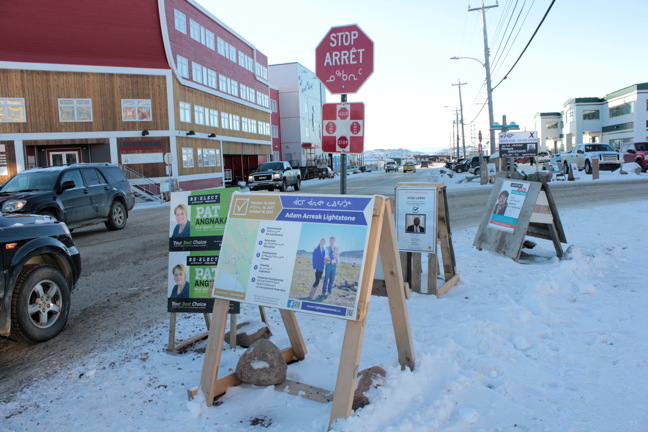 Running for office in Nunavut requires infrastructure. Get out and vote today, Nunavummiut. (PHOTO BY LISA GREGOIRE)

Over the last 35 days, Nunatsiaq News has brought you stories and ideas from most of the 72 candidates running for the seats in the legislative assembly of Nunavut.

One seat, Kugluktuk, is already decided. Mila Adjukak Kamingoak, the only declared candidate, won that seat by acclamation.

The other 21 seats are up for grabs today and the final result is now in the hands of more than 16,500 registered voters across the territory.

The only glitch in this year’s early vote was a blizzard Oct. 23 that closed polls in five of the 10 communities hosting advance polls, he said.

“But people still came out to vote,” Fredlund said.

The overall voter turnout in the 2013 election was 70 per cent.

“We’re voting across three different time zones, which is unique in Canada for a provincial or territorial election,” Fredlund said.

Starting at 10 a.m. eastern time, voters in Iqaluit can cast ballots at the cadet hall.

Click here to see where polling places are located in other communities.

Elections Nunavut has reached out to Nunavummiut outside the territory and country, including students, Canadian armed forces members and those employed on fishing vessels, to encourage mail-in voting.

Nunavummiut who are 18 years old, Canadian citizens and residents of Nunavut are eligible to vote.

To be a Nunavut resident, you must have been living in the territory for a year leading up to election day. If you work or study outside of the territory, Nunavut must still be considered your primary residence.

“And remember, you can register to vote on election day,” Fredlund said. “Voters who have changed their address or name can have that changed when they go to vote.”

Voters should bring identification that shows their address with them to the polls on election day. That can include a driver’s licence, vehicle registration or a Government of Nunavut general identification card.

As soon as polls close at 8 p.m. eastern time, and ballots are counted, verified and sent to Elections Nunavut’s headquarters in Rankin Inlet, results will be posted online to its website.

And Nunatsiaq News will offer you insight into the election results.

Still not sure who to vote for? Read Nunatsiaq News’ coverage of election candidates here.