The Innait Inuksiutilirijiit will assist in teaching about Inuit culture, tradition and knowledge 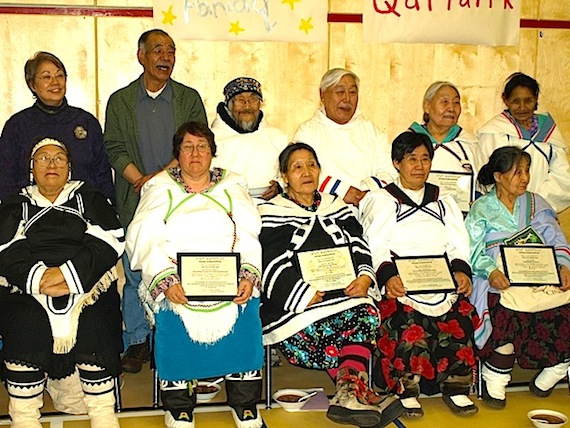 Premier Eva Aariak and MLA Louis Tapardjuk pose with a group of elders certified under the Education Act. (PHOTO COURTESY OF THE GN)

Fifteen Nunavut elders are now certified Innait Inuksiutilirijiit in Nunavut schools, a status that acknowledges “their skills, knowledge and abilities as an integral part of education in Nunavut,” a Government of Nunavut news release said April 25.

“I am proud to be here in Igloolik today,” said Aariak. “Certifying and recognizing Elders and their expertise plays an important role in creating a Nunavut education system that is founded in Inuit culture, language and traditions.”

Under section 102 of the Education Act, District Education Authorities can hire elders to assist in teaching about Inuit culture, tradition and knowledge.

The elder certification means these elders will considered as part of a school’s staff, the GN release said.

“My congratulations and sincere thanks to our Igloolik elders for their commitment to Nunavut’s learners. Many DEAs have begun this important process of certifying elders in their communities. The teachings from the Innait Inuksiutilirijiit will certainly enrich the learning experiences of our students and help build a stronger foundation of Inuit societal values in our schools,” Aariak said.