Infrastructure will support network of mines in Nunavut’s Izok corridor 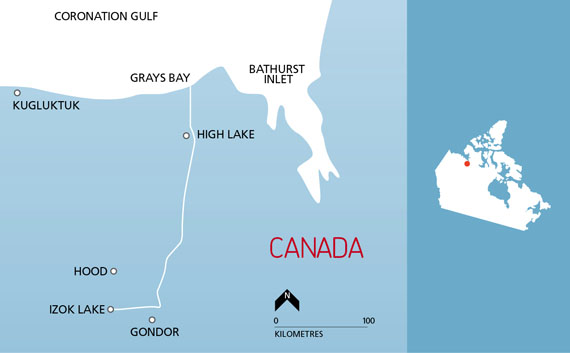 This map shows a route for a proposed port at Grays Bay on Coronation Gulf that would be connected by an all-weather road to a zinc mine at Izok Lake. (MMG IMAGE) 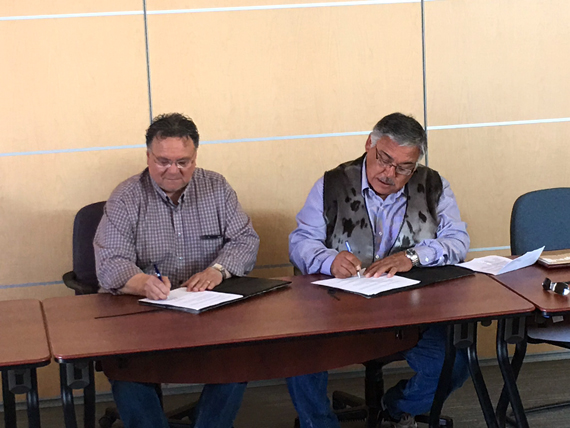 Nunavut Premier Peter Taptuna celebrated the territory’s annual holiday July 9 by signing off on an agreement with Kitikmeot Inuit to develop the first deep-water port and all-weather road in the western Arctic.

The massive transportation project includes a deep sea port at Grays Bay — just east of Kugluktuk along the Northwest Passage — and a 227-kilometre all-weather road south from there linking it to Izok Lake, a well-known zinc-lead mining corridor under exploration.

The project would connect the mineral-rich region to Arctic shipping routes, and form part of an eventual all-weather road and to Yellowknife, and from there to the national highway system.

“The potential benefits of the GBRP [Grays Bay Road and Port Project] project are far-reaching,” Taptuna said in a July 9 release.

“A deep water port in western Nunavut will both reduce the high cost of living and stimulate economic activity in the region of Kitikmeot.”

Later the same day, on Twitter, the premier noted the territory’s “self-reliance depends on responsible economic and resource development.”

The Chinese-owned MMG Resources Inc., which has proposed two mines at High Lake and Izok Lake, have put those projects on ice since 2013.

That’s when the company said it needed help to build regional infrastructure to support its $6.5-billion network of lead, zinc and copper mines along what’s known as the Izok corridor.

The newly-inked MOU now commits both GN and the KIA to prepare a project proposal on the port project for submission to the Nunavut Impact Review Board.

The Nunavut Resources Corp., a wholly-owned subsidiary of the Kitikmeot Inuit Association, would build and own the road and port in a partnership with the GN.

The all-weather road is considered the first phase in a much-anticipated link that would eventually connect Yellowknife to the Arctic coast, via the Tibbitt-Contwoyto winter road in the Northwest Territories.

But the GN and the KIA are both looking to the federal government for the estimated $34 million necessary to complete the permitting and engineering process alone.

The KIA and the GN have jointly submitted an application to the federal government’s Building Canada Fund to cover up to 75 per cent of capital costs.

Neither the GN nor the KIA has indicated the potential cost of building the port and all-weather road.

KIA President Stanley Anablak called its collaboration with the GN a “standard for how responsible development in Canada’s North should proceed.”

“As co-proponent of the GBRP Project, KIA’s participation will help guarantee that the project is developed in a manner that is consistent with Inuit values, including ensuring respect for the environment and the wildlife that we cherish,” Anablak said in a release.