“The consequences of losing litigation would be severe” 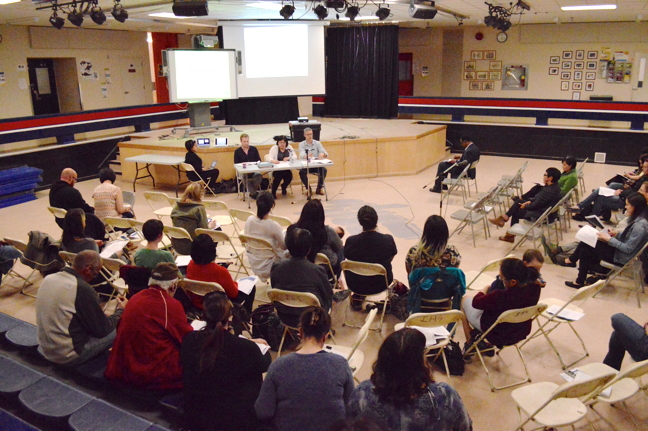 Iqaluit residents gather at Inuksuk High School in 2016 for community consultations towards a new Education Act. Two years later, the GN has launched a new consultation tour after its proposed legislation failed in 2017. (FILE PHOTO)

As the Government of Nunavut embarks on a new round of consultations on how the territory should revise its education and language acts, critics say the government seems more focused on pushing the legislation through to avoid potential lawsuits.

GN officials launched a new consultation tour on Sept. 17, with the goal of gathering feedback on the territory’s Education Act and Inuit Language Protection Act.

The government’s last attempt to revise the acts failed, when Bill 37 did not earn the support of the legislative assembly in 2017 and was withdrawn.

But Nunavut Tunngavik Inc. President Aluki Kotierk said she’s already “disappointed” by a lack of reflection and consultation that’s been done with stakeholder groups the second time around.

“To me, it’s not enough time,” Kotierk said. “The collaborative work should have happened before the consultation process started.”

Instead, she said the current round of consultations feel more like “an exercise in checking off a box.”

“Since this government came into power, NTI has consistently communicated that we want to collaborate on this,” Kotierk added. “We think any amendment done to this act needs to be done thoughtfully.”

The Department of Education has released a document called Our Goals for Education, which outlines the foundation of its plans for new amendments to the act, though its details do not differ greatly from what was proposed under Bill 37.

Among the largest criticisms of the bill were its plans to reduce and shift the powers of district education authorities; Bill 37 also proposed delaying the implementation of Inuktut instruction in Grade 4 to Grade 9 from 2020 until 2030.

As the Education Act currently states, the GN would be obligated to deliver bilingual education from Kindergarten through to Grade 12 by the start of the 2019-20 school year.

In a more thorough, but confidential, draft of a legislative proposal, obtained by Nunatsiaq News, the Department of Education spells out a plan to gradually introduce deadlines for bilingual education, starting with Inuktitut language arts in 2019 and a rollout for other Inuktut-language subjects between 2021 and 2024.

But the emphasis of the new proposal appears to be focused on changing those deadlines to avoid legal action.

“The Government of Nunavut remains at risk of non-compliance with its obligations under the Education Act and Inuit Language Protection Act, specifically related to language of instruction obligations and the 2019 bilingual education deadline,” reads the document, signed by Education Minister David Joanasie.

“As the GN is unlikely to be in compliance with this requirement, a representative plaintiff, who will most likely be funded by NTI, may launch an action alleging a violation of section 8 of the ILPA and sections 23 and 28 of the Education Act.”

“Given the shortage of Inuktut-speaking teachers and the constraints on building such capacity in rapid fashion, the government’s challenge would be significant,” the proposal continues.

“The consequences of losing litigation would be severe, and would likely impact the entire Government of Nunavut.”

The legislative proposal is dated May 24, 2018, when Paul Quassa still served as premier.

For its part, Kotierk said NTI has not threatened legal action with respect to the GN’s work on its education and language legislation.

“At no time have we ever indicated that we would take the GN to court,” she said.

The irony, Kotierk said, is that the GN is concerned about litigation related to extending its bilingual education from Grade 4 into more senior grades, when, in fact, a number of Nunavut schools struggle to even deliver Inuktitut-language education from Kindergarten through Grade 3—as is provided for in the current legislation.

“We would not entertain taking the GN to court over its Kindergarten to Grade 3 language requirements, if we are working collaboratively,” she said.

When the government first sought to push back deadlines for implementing an Inuktitut-language curriculum, NTI proposed that the Department of Education tap into its estimated pool of 1,000 Inuit supply teachers, by offering them provisional teaching diplomas while they complete training over a two-year period.

But Kotierk said the department has yet to put forward a comprehensive plan on how to increase the territory’s number of Inuktitut-speaking educators.

In its latest proposal, the Department of Education has said its plan includes redoubling recruitment efforts, a renewed emphasis on language training for teachers and an education-leave program for Inuit paraprofessionals.

“Let’s focus on those teachers,” she said. “We’ve been consistent in our message.”

NTI is also concerned that the new proposal makes little mention of the Nunavut Agreement. Legislators have also proposed deleting most references to Inuit Qaujimajatuqangit in the new act, a decision that does not appear to be up for further consultation, Kotierk said.

“From our perspective, it should remain as is,” she said. “What is the point of creating Nunavut if our culture isn’t the foundation of our [decision-making]?”

The education minister plans to table the new bill in the legislative assembly in early 2019.