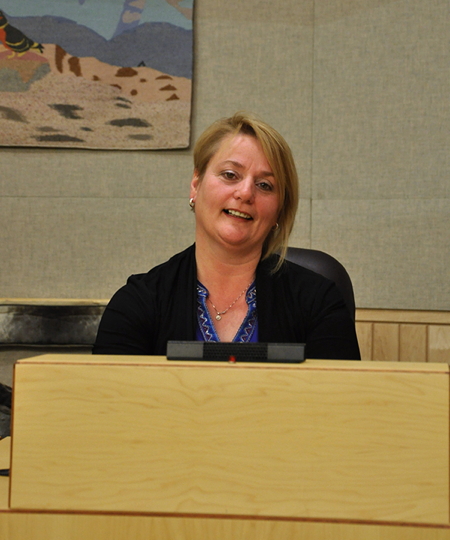 Iqaluit-Niaqunnguu Pat Angnakak is hoping the MLA committee of the whole can examine a number of human resource documents early in the new year in an effort to resolve ongoing workplace conflict issues in the Nunavut government’s public service. (PHOTO BY THOMAS ROHNER)

During the most recent sitting of Nunavut’s legislature in Iqaluit, an important issue, raised separately by four MLAs, surfaced repeatedly: the territorial government’s failed attempts to handle internal workplace conflict and bullying.

And if Iqaluit-Niaqunnguu MLA Pat Angnakak has any say in the matter, the issue won’t go away any time soon.

“I think it’s important and we need to keep talking about this issue because as soon as it’s back in the closet, that’s where it stays,” Angnakak said Nov. 19, sitting in her office in the Legislative Assembly.

“It’s going to be on my agenda for the rest of my term.”

Angnakak first voice her concerns about the issue in a two-part Nunatsiaq News series that looked at workplace bullying within the Government of Nunavut.

In that series, published just before the fall sitting, three former Nunavut public servants spoke anonymously about the serious, long-term health effects they suffered as a result of systematic bullying and harassment from their managers.

Since that series, Nunatsiaq News has been contacted by nearly a dozen more former and current GN employees with similar complaints.

Angnakak said she’s been contacted nearly every day about similar complaints, from people inside and outside Nunavut.

But when Angnakak first raised the issue in the legislature Oct. 22, Peterson said there are processes in place to deal with workplace conflict and suggested the problem isn’t a pressing one.

Seeming to contradict himself later, Peterson said during the Nov. 7 mid-term leadership review that handling workplace conflicts was the most challenging issue he’s faced in his past two years as a minister.

That’s despite bringing in new measures to provide employees with the means to handle such situations, Peterson said, responding to a question from MLA Joe Enook at the leadership review.

“I continue to hear these issues. That’s one of the most difficult, troubling areas for me,” Peterson said.

But right after admitting to the government’s struggles in handling workplace conflict, Peterson still put the onus on employees, not government, to find a fix.

Employees should take it upon themselves to use the protections against bullies provided by the GN, Peterson said.

“Don’t just sit there if there’s a manager or supervisor bullying you. Use the tools available to you and don’t be worried about fears of reprisal or reprimand,” the minister told MLAs Nov. 7.

“He’s talking about the processes in place. But are they efficient? Are they being used properly? No. If they were, we wouldn’t be having this conversation,” Angnakak said.

Where this conversation needs to go next, according to Angnakak, is to examine the GN’s current human resources structure.

A 2010 report by the Office of the Auditor General of Canada criticized the standalone human resources department, which prompted the GN to commission a follow-up report.

That was a mistake, Angnakak said, because the government lost its ability to coordinate and standardize human resource responsibilities across the government.

She also fears that within the finance department’s mandate, spending and budgeting are bound to take precedence over the needs of people.

“In my opinion numbers become the priority, versus the people,” she said. “And in fact I think people start to be numbers too after a while.”

Angnakak added that she’s never seen the follow-up report commissioned by the GN that led to the decision to get rid of the standalone human resources department.

That report, done by a consultant named Ken Lovely, has never been tabled in the house, Angnakak said.

On the last full day of the fall sitting, Nov. 5, Angnakak tabled a motion, seconded by MLA Joe Enook, to refer a number of the GN’s human resource documents for review in committee of the whole.

MLAs passed that motion which named, among other documents, the Public Service Code of Values and Ethics and the Human Resource Strategy 2014-2018.

“I’m hoping at those meetings that everybody can be on the same page and say, ‘yup, there is a problem.’ And the next step is, how can we go about addressing those problems?” Angnakak said.

The next committee of the whole meetings will take place during the assembly’s 2016 winter sitting, which is expected to start Feb. 24, 2016.