“He was a wolf masquerading as a good shepherd. His life as a priest was a lie.” 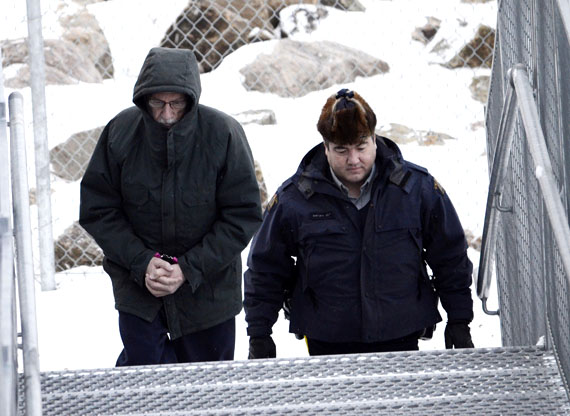 “Your selfishness has devastated a generation of young Roman Catholic parishioners in Igloolik. Many lives have been irrevocably altered by your dark legacy,” Kilpatrick said in a direct address to Dejaeger.

The judge imposed a sentence of 19 years, minus eight years, calculated on a two-for-one basis from the four-year period during which Dejaeger was detained in custody following his arrest in January 2011.

Kilpatrick, following a lengthy trial held through 2013 and 2014, convicted Dejaeger this past September on 24 of 68 charges he stood trial on.

Dejaeger had also pleaded guilty, in November 2013, to eight other charges.

The 32 counts on which Dejaeger is convicted involved 23 victims: 10 girls and 13 boys.

The victims, now middle-aged adults, were between the ages of nine and 13 when Dejaeger molested them.

Kilpatrick said Dejaeger travelled to Igloolik as a member of the Roman Catholic church’s Oblate order to serve others and to devote his life to God.

But instead, Dejaeger committed a profound breach of trust.

“He was a wolf masquerading as a good shepherd. His life as a priest was a lie,” Kilpatrick said.

He also said Dejaeger “brought incalculable harm to the standing of the Roman Catholic Church and of the Oblate Order of which he is a part.”

Prior to his judgment, Kilpatrick heard numerous harrowing stories from people who were children when Dejaeger molested them.

And he heard competing submissions from lawyers.

Crown prosecutor Doug Curliss asked Kilpatrick for a 25-year jail sentence, minus about eight years to account for the four years of hard time Dejaeger has spent in custody, on a two for one basis.

Defence lawyer Malcolm Kempt asked for a sentence of 12 years, minus time served.

But Kilpatrick said 12 years is “not proportional to the number and gravity of Mr. DeJaeger`s offences or the high moral culpability flowing from the circumstances in which they were committed.”

In his judgment, Kilpatrick said Canadian courts have shifted their approach over the past 20 years in the sentencing of offenders who commit sex offences against children — to emphasize denunciation and deterrence.

“A deterrent sentence becomes necessary to protect a vulnerable class of victims from those who are prepared to risk harming others in order to satiate their own selfish sexual desires,” he said.

To that end, Kilpatrick decided that he must impose a global sentence of 19 years.

“An exemplary sentence is needed to reflect not only the high moral blameworthiness associated with the crimes, but to denounce and deter sexual offences against children and adolescents in Nunavut,” he said.

In reaching that decision, Kilpatrick found numerous aggravating factors and no mitigating factors in the way he committed his offences.

“This priest knew at all material times that his behaviour was morally wrong and contrary to the laws of both man and God,” Kilpatrick said.

He also said that “little weight” can be given to the fact that Dejaeger has committed no sex offences since his release from prison in 1992, when he served time for child sex offences committed in Baker Lake.

That’s because, in 1995, Dejaeger evaded a new set of charges that arose from his Igloolik victims.

“Rather than face the new charges, Mr. DeJaeger skipped his bail and fled the country. He remained unlawfully at large in Belgium until he was returned to Canada in January 19, 2011,” Kilpatrick said.

He also discounted an apology that Dejaeger made at the end of his sentencing hearing.

“A claim of remorse rings hollow when made following a trial and immediately before the imposition of sentence. An expression of remorse is best made before, and not after, a victim is humiliated by a public trial.”

And he addressed part of his judgment to Dejaeger’s numerous victims.

“Your anger must be put aside. Your trust in others must be restored. You must learn to rely on the good around you, in your family, in your neighbors, and in your community,” he said.