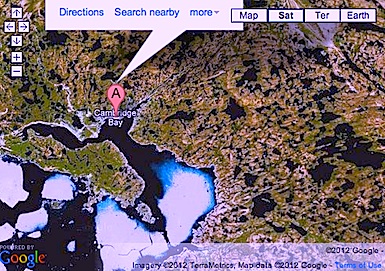 When you go to Google Maps at http://www.maps.google.ca/ and search for Cambridge Bay, Nunavut, this is what you’ll find. Then you can then zoom into the community and see various sites of interest around the town. 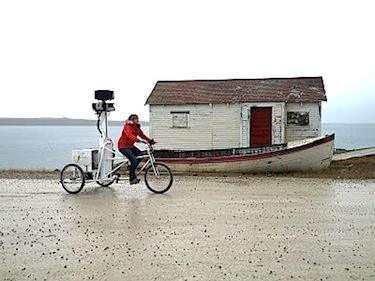 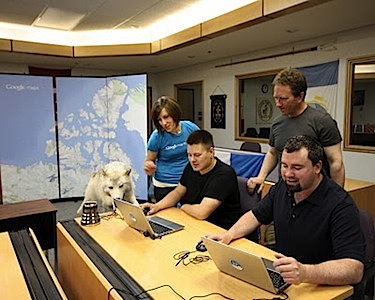 Catherine Moats, a member of the Google map maker team, works with Chris Kalluk and others at the “Community Map Up.” (PHOTO COURTESY OF GOOGLE)

Prime Minister Stephen Harper’s visit to Cambridge Bay Aug. 22, which included an inspection of local Canadian Rangers, a visit to the Martin Bergmann research vessel and an evening feast with entertainment, also coincided with news that this western Nunavut community will become the first in Nunavut to be shown in detail on Google Maps’ street view service.

On the web-mapping site, which uses powerful mapping technology to show places around the world, now you can “search for [cambridge bay] on Google Maps and you’ll fly to a tiny hamlet located deep in the Kitikmeot Region of Nunavut in Canada’s Arctic, surrounded by an intricate lacework of tundra, waterways and breaking ice.

“High above the Arctic circle, it’s a place reachable only by plane or boat. Zoom in on the map, and this isolated village of 1,500 people appears as only a handful of streets, with names like Omingmak (“musk ox”) Street and Tigiganiak (“fox”) Road,” reads a Google blog, which also notes there are “4,000 years’ worth of stories waiting to be told on this map.”

And it’s their first visit to Nunavut.

“Using the tools of 21st century cartography, we’re empowering a community and putting Cambridge Bay on the proverbial map of tomorrow,” the Google blog said.

Cambridge Bay is also set to become the site of the Canadian High Arctic Research Station in 2017.

For the mapping effort, Google has had some help from people in Cambridge Bay, like Chris Kalluk, who works for Nunavut Tunngavik Inc.

On Aug. 22 Kalluk hosted a community “Map Up event” in Cambridge Bay, where elders, local mapping experts and teenagers like Mia Otokiak, Siobhan Bligh, and Kean Niptanatiak, gathered around a dozen Chromebooks and used Map Maker to add new roads, rivers and lakes to the Google map of Cambridge Bay.

Among the sites of interest which they added: the Kitikmeot health centre, the child care centre, a nine-hole golf course, the Ovayok territorial park and the remnants of an ancient Dorset stone longhouse.

Catherine Moats, a member of the Google map maker team, worked with Kalluk and others at the “map up.”

The team now plans to start pedalling their Street View trike around the town and use a tripod to collect images.

Google will also train Kalluk and others in the community to use some of this equipment so they can travel to other communities in Nunavut and “continue to build the most comprehensive and accurate map of Canada’s Arctic,” Google said.

Google has donated 10 Chromebooks to the effort and is lending NTI 360-degree picture camera gear “indefinitely.”

“This is a place with a vast amount of local knowledge and a rich history. By putting these tools in the hands of our people, we will tell Nunavut’s story to the world.” Kalluk said.