“What is the difference between pigs and seals?” 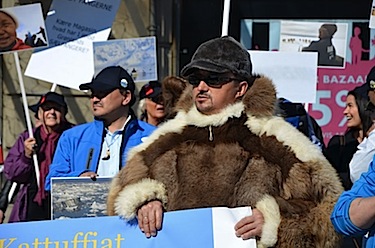 A Greenlandic demonstrator wearing traditional clothing turned out May 1 in Copenhagen to protest the decision of a Copenhagen department store not to sell seal products. (PHOTO BY SØREN DURAN DUUS/COURTESY OF SERMITSIAQ AG)

“Wear our seals with pride,” that was the message of Greenlandic politician Sarah Olsvig during the May demonstration of more than 150 Greenland seal hunters and their supporters in Copenhagen on May 1.

“We Greenlanders have always been a peaceful people — maybe sometimes a little too timid. But today we are gathered here with a clear message: We’ve had enough,” she told the crowd who marched from le Magasin, a department store that recently decided it won’t sell seal products any more, through downtown to a city park.

That sparked the May 1 protest, which fell on Labour Day (International Workers’ Day) in Denmark.

“It is a legitimate business,” said Olsvig about sealing as she spoke to the crowd under sunny skies. Its management is constantly improving and “suits our country,” she said.

The EU ban exempts products from traditional hunts carried out by Inuit in Canada as well as in Greenland, Alaska and Russia. Trade is permitted where it results “from by-products of hunting [and] conducted for the purpose of sustainable management of marine resources on a non-profit basis.”

But Olsvig said the department store’s new fur ban is a clear example that the EU’s exception to the Greenland seal does not work in practice, slamming the ban as an example of eco-imperialism and cultural imperialism.

Doris Jakobsen, who represents Greenland in the Danish parliament, also questioned in her speech why le Magasin jumped on the wave of hypocrisy about certain animals.

It’s all about European hypocrisy, she said.

Seals are not an endangered species and the catch of seals in the world is not a threat to stocks, she said.

“Seal hunting is a legitimate business — at least as legitimate as pig farming, chicken farms, cattle farming, fishing and trading of horses. But Europe has systematically over many years — under the influence of organizations like Greenpeace and individuals as Brigitte Bardot — has undermined the international trade in sealskin,” she said.

Now the EU has created a new prohibition, she said, but with an exception for seals caught by Inuit, he said.

Jakobsen said there are also options to sell products, such as Asia, which is “exploding in economic growth, and there should be plenty of customers for our high quality products.”

“We can not sit on our hands and hope that the EU and le Magasin will change their position,” she said.

Jakobsen said Greenland must demand that the EU recognize sealing and whaling in Greenland “as a legitimate, sustainable business with the right to free trade before they get any support in their desire for participation in the Arctic Council.”

“The world is changing, but the struggle against the remnants of cultural colonialism is not over. Fortunately, the time with us. The Arctic is the future,” she said.