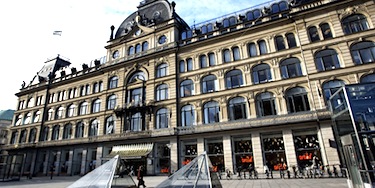 On May 1, Labour Day and a holiday in Denmark, seal hunters from Greenland and their supporters plan to demonstrate in front of the Le Magasin department store in downtown Copenhagen because the store has decided to stop selling any seal products. (PHOTO COURTESY OF LE MAGASIN)

Twelve seal hunters from Greenland will lead a protest in Copenhagen May 1, which is celebrated as Labour Day in Denmark and other European countries.

The hunters and their supporters plan to march past the city’s venerable downtown department store, called Le Magasin, which has decided to stop selling seal products.

“There is no demand for seal products, Helle Skov, the communications director for the Danish department store, sold to British owners in 2009, told the Nuuk-based newspaper Sermitsiaq AG earlier this year.

Sara Olsvig, one of two MPs who represent Greenland in Denmark’s parliament, told the newspaper that people in Denmark and across the European Union know too little about the EU’s Inuit exemption to its seal product ban, which allows Inuit seal hunters to sell seal products to the 27 EU-member nations.

The ban exempts products from traditional hunts carried out by Inuit in Canada as well as in Greenland, Alaska and Russia. Trade is permitted where it results “from by-products of hunting [and] conducted for the purpose of sustainable management of marine resources on a non-profit basis.”

“That a department store in Denmark directly prohibits the sale of sealskin products, I think that’s a clear example of how the Inuit exemption does not work in practice,” Olsvig said. “There is a lot of work being done in promoting and producing sealskin products to discerning consumers in Europe, but, if more and more shops stop selling all seal products for “animal ethical” reasons, we won’t get very far.”

To promote Greenlandic sealing in the EU in advanced of the May 1 demonstration, Greenland’s hunters and trappers association KNAPK has produced a three-minute YouTube video in Danish and Greenlandic.