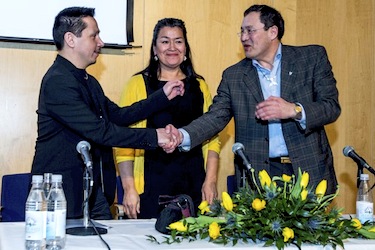 A no to any increase in offshore drilling, but a yes to more mining — with conditions.

Her government’s position represents a change from the previous stance taken by former Premier Kuupik Kleist, who promoted oil and gas development for Greenland.

Many companies already have licenses for drilling offshore Greenland — but the quest for oil needs to take place in a measured away, in tandem with society, Hammond said March 26.

Cairn Energy and other companies, which have exploration licenses set to expire in 2017 and 2020, can continue their hunt for oil on the western coast, according to the conditions of their licenses, reports in Greenland’s Sermitsiaq newspaper said.

But it means that licenses for 11 additional blocks on northeast Greenland — which could hold as much as 31 billion barrels of oil — won’t be handed out, as had been expected.

Greenpeace, which has lobbied against offshore drilling in Greenland, was pleased with the announcement that Hammond would put the brakes on offshore oil and gas development.

Her new coalition government, comprised of members of the Atassut and Partii Inuit parties, also plans to revisit a law, passed last December, that could see large mining projects bringing in thousands of outside workers.

“As our country develops toward statehood, the need for Greenlandic labor is greater than ever,” the coalition said in recent statement. “The coalition emphasizes that foreign labor should be minimized.”

The coalition plans to set up a resource committee to keep control of mineral exploration and extraction.

But the new government is open to lifting the ban on uranium mining — which could lead to mining for rare earth minerals, commonly used in flatscreen televisions, laptops, iPod earbuds, digital cameras and the heat-resistant magnets used in green technology.

Kvanefjeld, with the world’s second largest deposit of rare earths and the world’s fifth largest uranium deposit, is located in southern Greenland. It’s technically impossible to extract the rare earths there without also extracting uranium.

But, while the Greenland government has control over uranium mining rights in the country, Greenland must ask Denmark for permission before it can move ahead with uranium mining and the mining of the rare earths at Kvanefjeld.

News reports suggest that a majority of members of the Danish parliament seem ready to support the extraction and export of uranium from Greenland.

Siumut, Partii Inuit and Atassut will be able to control Greenland’s parliament: together they hold 18 seats in the 31-seat parliament, while the opposition, consisting of the Inuit Ataqatigiit and Democrat parties, have 13 seats.