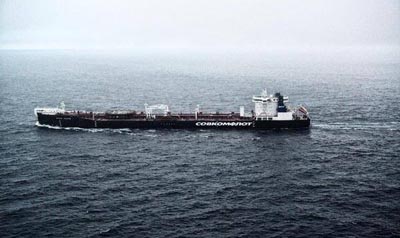 Greenpeace says it has dispatched a group of activists to intercept this Gazprom oil tanker en route to Rotterdam with its first ever shipment of Arctic offshore oil. (PHOTO BY DMITRIJ LELTSCHUK/GREENPEACE)

Greenpeace International says one of its ships is now headed towards a Gazprom oil tanker to protest the first shipment of offshore oil produced in Russia’s Arctic waters.

Environmental activist Peter Wilcox, who captains its Rainbow Warrior III, was setting sail from the Netherlands with plans to intercept the Gazprom tanker on its way to Rotterdam, Greenpeace said April 28.

Wilcox captained the infamous Arctic Sunrise and was one of the Arctic 30 – a group of Greenpeace activists, along with two journalists, who faced charges of hooliganism and piracy following a September 2013 protest at the site of Gazprom’s oil platform in northwest Russia.

Wilcox spent two months in a Russian jail before he and his colleagues were granted amnesty and released last December.

This will be the environmental organization’s second attempt to interfere with Russia’s Arctic oil drilling operations, although Greenpeace has not said what activists plan to do once the Rainbow Warrior reaches the Gazprom tanker.

Gazprom’s Prirazlomnoye platform is located in an oil field about 60 km offshore from Russian and is considered the first Arctic-class ice-resistant oil platform in the world.

The Prirazlomnoye field is estimated to hold 72 million tonnes of harvestable oil. Gazprom, which began production in December, is expected to recover six million tonnes a year after 2020.