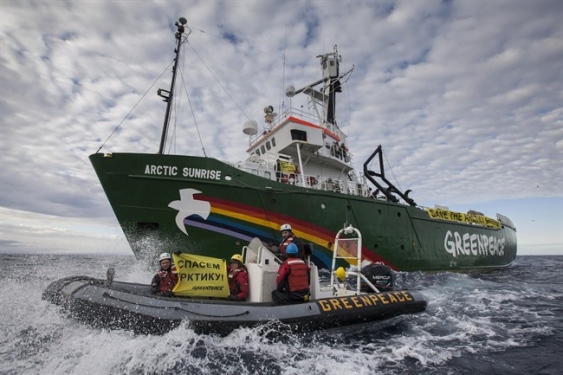 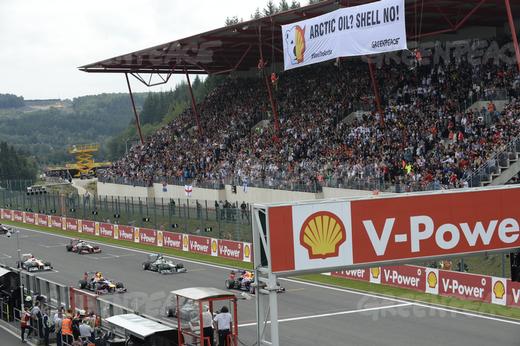 “Arctic Oil? Shell No!” reads a banner strung Aug. 25 across a Grand Prize race in Belgium by Greenpeace. (PHOTO COURTESY OF GREENPEACE)

The Greenpeace ship Arctic Sunrise entered Russian waters above northwestern Russia Aug. 24 to protest against Arctic oil drilling and seismic testing, in defiance of Russian authorities who had refused the ship permission to enter the area, Greenpeace reported Aug. 24.

But two days later, on Aug. 26, Russian officials boarded the Greenpeace ship, the Arctic Sunrise, in the Arctic to protest against oil drilling.

Greenpeace said Russian Coast Guard officials boarded the ship Aug. 26 “without permission,” after the group launched inflatable boats with banners reading “Save the Arctic” near an oil exploration vessel.

Russia’s ministry of transport reportedly justified denying the vessel permission to enter its waters, by saying Greenpeace had not provided information about the ship’s hull protection.

Greenpeace said that two previous requests for permission to enter Russian waters had not sought that information.

Later on Aug. 26, the Arctic Sunrise had decided to leave Russian waters “under threat of force from the Russian Coast Guard,” Greenpeace said.

“We are a peaceful protest ship and have done nothing to warrant the threat of force against us. We now are leaving the area to avoid any risk to our crew, but we will not stop until offshore drilling in the Arctic is banned and will continue to shine a light on the secretive activities of oil companies in the Russian Arctic. We won’t be intimidated into silence,” said Christy Ferguson, Greenpeace activist on board the Arctic Sunrise.

Ferguson and others on the Greenpeace ship said they planned to engage in a peaceful protest against oil exploration next to the Russian Arctic National Park, where Russian oil major Rosneft and its United States partner ExxonMobil are preparing to drill.

The National Park, established by Russian president Vladimir Putin’s decree in 2009 to develop tourism in the North, is referred to as the “Pearl of the Arctic.”

These include lands in the Bolshoi Arctichesky Nature Reserve, Franz-Josef Land Nature Reserve and the Wrangel Island Reserve, which is an UNESCO World Heritage Site also known as a “maternity ward” for polar bears. Most of these concessions owned by Rosneft will be jointly explored with ExxonMobil, Greenpeace said.

On Aug. 25, 35 Greenpeace activists also attempted to get their anti-Arctic-drilling position across at the Belgian F1 Grand Prix track.

Two protesters headed to a giant Shell billboard on a corner of the track before being arrested by police, while another team scaled the roof of the main grandstand opposite the VIP enclosure where they unfurled a 20-metre-long banner saying “Arctic Oil? Shell No!”

Shell is the main sponsor of the Belgian Grand Prix, paying millions of dollars to have its logo visible around the track, and is leading the oil companies’ drive into the Arctic, investing billions in its Alaskan and Russian drilling programs, Greenpeace said in a news release.