Grise Fiord faces Easter without a church, after building lost to fire 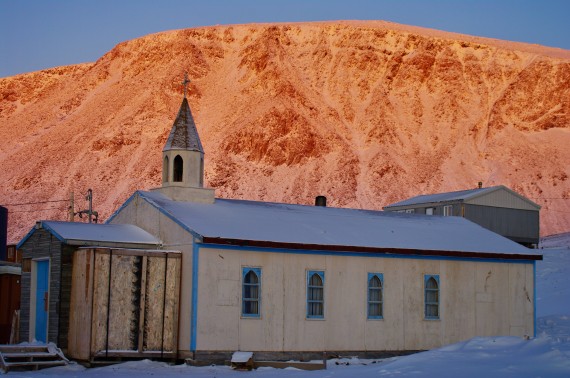 This photo of St. Peter’s Anglican Church, the only church in Grise Fiord, was taken in 2011. The church, while still standing, was ruined beyond repair in an accidental fire on Feb. 27. (PHOTO BY FRANK REARDON)

“He physically built it with his father … He was a very good carpenter,” Quttiktuq MLA David Akeeagok told Nunatsiaq News March 2, following his own phone conversation with the unilingual elder.

The church, the only place of worship in the High Arctic community of about 130, was gutted in a fire last week, in the evening of Feb. 27.

“I had a conversation with him last night. I was saddened just to hear about it,” said Akeeagok, who is currently based in Iqaluit. “When I was up there last month I had an opportunity to go to church with the community. My wife and I got married there, on Aug. 8 of 1998. It was a beautiful church.”

The fire was accidental, according to RCMP. There are no suspects, no one has any injuries, and no further investigation is being done.

“The wood stove in the church was used during the day and embers from the stove appear to have ignited flames in the church,” RCMP Cpl. Henry Coman told Nunatsiaq News in a statement. “Although the structure still stands, it is a total loss.”

While the church is lost, a keyboard and some sound equipment were salvaged, along with paper records that hold value for parishioners.

“We were able to recover some marriage and baptism certificates and confirmation [letters] … all the important documents that have happened over the years. There’s a little bit of damage to them but we got them all out,” said Marty Kuluguqtuq, who is assistant senior administrative officer for the hamlet and a member of the fire department.

About 10 volunteer firefighters worked to put out the fire, which spread mostly to the space between the ceiling and the roof, Kuluguqtuq said.

“The building didn’t go in flames. We were able to recover a lot of the items inside … There’s a lot of smoke damage and water damage,” he said. “We stood down by two o’clock or 2:15. The boys did a pretty good job. There were a few hot spots, we kept an eye on it and kept it from spreading.”

Firefighters learned later that the stove in the church was being cleaned the day of the fire.

Kuluguqtuq said that churchgoers in the hamlet are now making plans for how to have their Easter celebrations without the building.

“It’s been the only church that residents have turned to for faith and it holds a lot of memories for the few people that have been married up here or baptized here,” he said. “It was one of the first buildings in town, and it has been well maintained by local volunteers, and community members use it on a regular basis.”

Akeeagok said he is thankful to all the organizations that are working to support the community in the wake of the fire.

“It’s going to take a community effort to rebuild our church and I look forward to working closely with them as we take this time to rebuild the church,” he said. “When a fire affects a community, you all of a sudden don’t have space … I’m confident with a community that closely knit they’ll be able to find space soon.”