“You are here speaking to the world as if you are the voice of Nunavik,Quebec. Why aren’t the leaders of Nunavik with you on this campaign?” 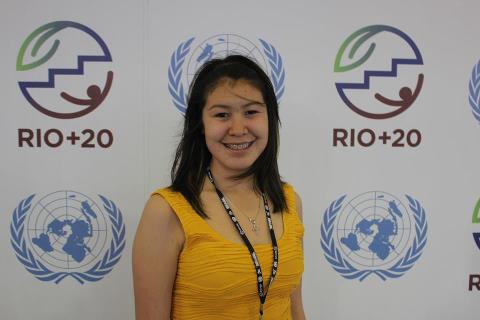 Minnie Molly Snowball, 17, of Kangiqsualujjuaq, seen here in a recent photo taken at the Rio +20 summit on sustainability, told Premier Jean Charest June 21 what she and other Nunavik Inuit think about Plan Nord. (PHOTO COURTESY OF M. SNOWBALL)

Minnie Molly Snowball, a 2012 graduate of Ulluriaq School in Kangiqsualujjuaq who visited Rio de Janeiro this week to attend the Rio +20 United Nations Conference on Sustainable Development, finally got the chance to tell Premier Jean Charest what Nunavik Inuit think about Plan Nord.

Snowball (known on Facebook by the Inuktitut version of her name, Minimaali Sinuupa), who was at the summit as a member of the Students On Ice delegation, had asked Nunavimmiut on the Facebook news page “Your voice on Nunavik Issues for issues to raise with Charest — if she could speak to him at the Rio +20, conference, held 20 years after the first world summit on sustainable development there.

Snowball told Charest she did not know about Plan Nord — first unveiled in May 2010 — until the end of last year.  And Snowball said she “absolutely” does not support Plan Nord.

“Neither do most of the Inuit in Nunavik,” she said. “Honestly, the probability of Inuit not supporting Plan Nord is very, very high. Considering the fact that I learned 70 per cent of Inuit do not know about Plan Nord.”

Snowball said Inuit, are “very concerned about how little we know,” and they’re worried about damage to the land, “we’ve lived and relied on for thousands of years.” And “because we do not know well about Plan Nord, we are afraid,” she told Charest.

Snowball listed the many concerns of Nunavimmiut, who, among other things, want to know why “you have not given us a chance to share our voice [and] opinions” and whether there will be any positive impacts for Inuit.

Snowball also wanted to know whether Charest has visited the North for consultations on Plan Nord, and if not, when he will come.

Snowball criticized Charest for coming to the Rio summit and promoting Plan Nord there, when he has not yet let Inuit, “have an opportunity to share our voice and opinions about Plan Nord.”

“You are here speaking to the world as if you are the voice of Nunavik,Quebec,” she said. “Why aren’t the leaders of Nunavik with you on this campaign? Why did you choose to promote Plan Nord without them present? To talk about our side of the story? How would you feel if we had plans for the south to exploit your backyard for our own benefit and promote it without your presence?  Your plan will ruin our culture, our people! This will put a mark in our lives for a lifetime, for the rest of the living of the world! It will not hurt only the land, the ozone layers, the earth, but also us, Inuit, and the next generations to come. ”

Snowball said Nunavimmiut “want to share our voice, our opinions, our thoughts to you.” And she told him that if he has time to plan for Plan Nord, “you must have the time to hear our voices!  ”

“We have our own, unique culture, our own language, and way of life,” she said. “Our ancestors struggled living in our land, but they never gave up. They faced many difficulties and struggled to even find food. The only way they communicated was orally. They knew very little about governments, politics, wealth, agreements, land claims and more until the 1950s although they still governed themselves.  ”

However, Inuit today have a better understanding of governments, politics, wealth, agreements, land claims and more, said Snowball, who will attend John Abbott College near Montreal in the fall.

“We’ve improved a lot and our way of life evolved for the better or worse. Today, Inuit, like myself, get more opportunities to learn, make a little more money and learned what is wrong and right in a political world. We have feelings, power, shelter, microwaveable food, electricity in our communities, jobs and whatnot,” she said. “We are as human as you.”

Snowball said Inuit “just do not want to be stepped on like we’re less of a human.”

“We do not want to be played, pushed around and just flown around. It is not fun. What will happen to us next? Will we just be put aside?  We’re losing our culture. We’re living in civilization,” she said. “The only thing besides our language, that brings closure to our ancestors and us today, is our land.”

Snowball told Nunatsiaq News that Charest listened to her — “in fact the whole room was quiet and they were all listening to me. He responded to me like I was an adult.”