Halloween isn’t all fun for some Nunavut communities 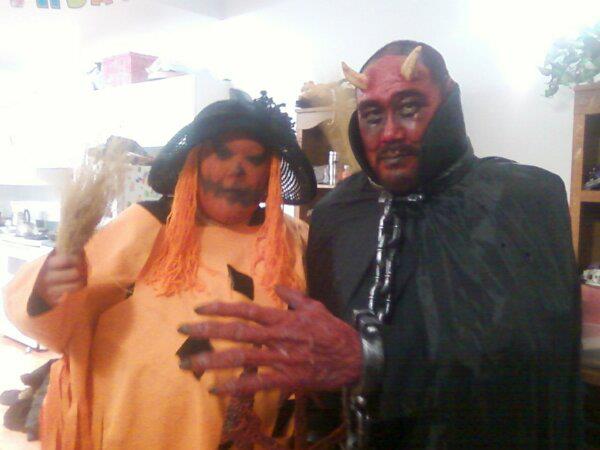 This Aliktiluks advertised treats for those who still choose to go door-to-door on Halloween night in the Kivalliq community, where polar bears pose a threat to those travelling outside at night. (FACEBOOK PHOTO)

“We got a bit of treats to give out!” the Aliktiluk family posts Oct. 31 on a community Facebook page from Arviat.

Another poster says he’ll have treats for trick-or-treaters, but urges kids to be safe outdoors.

The Kivalliq hamlet’s recreational department has another option for local families: the Children’s Frightfully Fun Halloween Gathering, which starts Oct. 31 at 6 p.m. in the community hall. There will be treats, an indoor playground and a haunted hallway for teens to enjoy.

The contrast of indoor and outdoor events has become a common scenario at Halloween in Arviat, which regularly sees nuisance polar bears in and around the community.

Arviat was one of two Nunavut communities that suffered a fatal attack this past summer, when a 31-year-old man was mauled to death just outside the community in July.

The Hamlet of Arviat banned outdoor trick-or-treating in 2014, instead opting to host an indoor event for children to attend.

Since then, the decision to allow children to go door-to-door remains a stressful one. Children want to trick-or-treat, residents say, but they take a risk if they do.

Since the July attack, community members say there has been a fairly steady stream of polar bear visitors coming in from the bay, into town or to visit its dump site.

And Halloween night can attract more than 1,000 children and youth out on the community’s streets at nightfall, when it’s more difficult to spot the bears.

Arviat, which has a population of about 2,800, has two monitors whose job it is to patrol the community through the evening and night to deter bears from coming into the community.

Farther up the Hudson coast on Southampton Island, people in Coral Harbour had to destroy a number of polar bears this past summer, when the animals kept coming into the village.

There are fewer bears now that the sea ice is freezing over, the hamlet said.

On Oct. 31, the local hunters and trappers organization in Coral Harbour hired monitors to patrol the community on Halloween night, just to ensure children are safe.

And the hamlet’s bylaw officer normally patrols the community to deter any nuisance bears.

But Kivalliq communities say the presence of polar bears continues to threaten the safety of residents, whether at Halloween or not.

In response to those concerns, the Government of Nunavut said its Environment Department is developing a polar bear safety and deterrence training course, which will be rolled out across the territory.

The GN also runs a Wildlife Damage Prevention program, which offers a total fund of $60,000 that Nunavummiut can apply for to buy deterrents like electric fencing, bear-resistant storage units and cabin reinforcements.