GN jacks up prices for gasoline, diesel and jet fuel 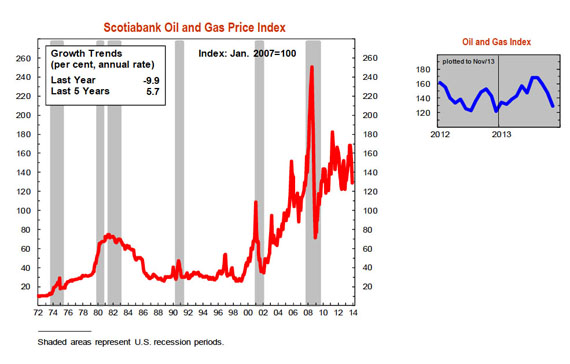 This graph from Scotiabank’s latest report on global commodity prices shows a 9.9 per cent decline for 2013 in their oil and gas price index. It’s possible, however, that the GN bought this year’s fuel supply during a temporary spike in prices last spring or summer, creating a cost increase that has to passed on to Nunavut energy users. (SOURCE: SCOTIABANK COMMODITY PRICE INDEX)

In a Dec. 20 news release, the Government of Nunavut announced it is raising prices of diesel, gasoline and jet fuel as of Jan. 1, 2014.

The GN’s petroleum products division buys the territory’s entire fuel supply every summer and fall, then sets the price for each fuel category and sells it directly, or through contracted agents.

The increases are as follows:

The news release did not mention home heating oil.

The GN dropped the price of home heating oil two years ago by five cents per litre.

The reason the GN gives for the hikes?

“These new rates reflect world fuel prices that continue to increase,” the new minister of community and government services Tom Sammurtok said in the news release.

But the latest Scotiabank Commodity Price Index report — issued this past Dec. 19 — found that in 2013, global oil and gas prices declined by 9.9 per cent between January and November of 2013.

Since 2008, Scotiabank found oil and gas prices rose slightly, by 5.7 per cent.

“Nunavut has enjoyed some of the lowest and most stable fuel prices in Canada. Our retail prices for gasoline and home heating fuel have not increased since 2008,” Sammurtok said.

In the news release, the government also encourage Nunavummiut to “take advantage of programs offered” by the GN.

That includes a senior fuel subsidy to “assist elders with home heating costs” and a fuel tax rebate that “offers harvesters, outfitters and tour operators a tax rebate of 6.4 cents per litre on gasoline for eligible activities.”

The GN does not provide community by community price information for most of its petroleum products.

The GN sets fuel prices for each community under an obscure formula.

And it’s not clear to what extent fuel prices for each community are subsidized, and how much cross-subsidization is involved in the pricing of different products.