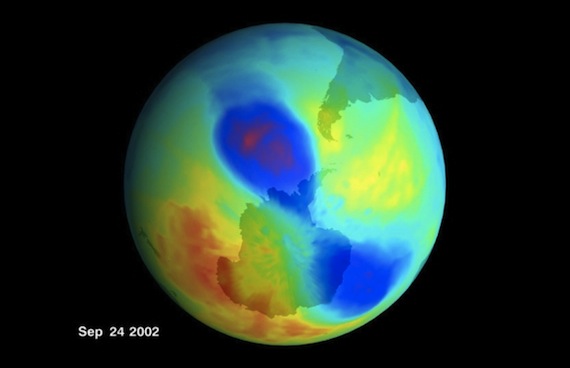 Environment Canada is planning to axe a monitoring network that is key to assessing Earth’s protective ozone layer, according to a report in a leading science journal. (FILE IMAGE)

Environment Canada is planning to axe a monitoring network that is key to assessing Earth’s protective ozone layer, according to a report in a leading science journal.

The British journal Nature says scientists and research institutes around the world have been informally told the Canadian network will be shut down as early as this winter putting an end to continuous ozone measurements that go back 45 years.

“People are gob smacked by this decision,” Thomas Duck, an atmospheric researcher at Dalhousie University, said in an interview with Postmedia News.

He and his international colleagues say they’ve been told the network and a related data archive will be closed down as part of the Harper government’s deep cuts at Environment Canada where hundreds of jobs are being are eliminated.

The scientists say the “drastic” cuts to the ozone program threaten not only international monitoring programs, but Canada’s reputation.

“Withdrawal of Canada will do major harm to international efforts in Arctic ozone research and such a bold step jeopardizes Canada’s reputation as a reliable partner in international programs,” Rex told Postmedia News via email.

Environment Canada would not comment on the Nature report, or the fate of the ozone network and data archive. Nor would it say how much money will be saved by shutting them down.

“Programs are presently being reviewed,” Mark Johnson, an Environment Canada media officer, said by email. “At this time, we are not in a position to identify which specific programs will be subject to adjustments or reallocated funding.”

The Canadian ozone network, described in Nature as “a linchpin of Arctic ozone observation,” consists of 17 monitoring stations from Sable Island, N.S., to Alert in the High Arctic.

Scientific balloons are launched from 11 of the stations at least once a week.

The Canadian network provides about a third of the Arctic measurements of the ozone layer, which this spring developed a “hole” over the northern Hemisphere.

Along with shutting down the ozone network, the scientists have also been told Environment Canada will no longer maintain the World Ozone and Ultraviolet Radiation Data Centre, an archive of data stored in Toronto that is used by researchers around the world.

“It appears that the management at Environment Canada was not fully aware of the consequences of its decisions,” says Swiss scientist Johannes Staehelin, who chairs the World Meteorological Organization’s ozone science advisory group.

The scientists say they are shocked by the planned cuts given the mounting concern about the ozone layer, which protects the planet from the sun’s harmful ultraviolet radiation.

“Arctic ozone losses continue to get worse despite the regulation of ozone-depleting substances,” says Rex, who has been collaborating with Environment Canada scientists to try to understand what is going on.

He says the Canadian cuts also threaten to erode the Montreal Protocol, an international agreement that obliges Arctic countries to monitor the ozone layer and maintain scientific ozone research.

Closing down Canada’s ozone stations and the Toronto data archive “would clearly be seen as eroding the regulations of the Montreal protocol,” Rex says. “Once such an erosion process starts other countries can follow and may start to question other parts of the regulations under the Protocol.”

The Environment Canada cuts are part of what many see as an alarming erosion of the country’s government science.

On Tuesday, reports surfaced that Ottawa is looking to “shut down” a one-of-a-kind archive of ancient Canadian ice cores, collected over a period of 40 years by federal scientists. Geological Survey of Canada glaciologist Christian Zdanowicz has appealed to universities or other scientific bodies to consider taking over management of the ice archive that is threatened by “strategic budget compressions” at Natural Resources Canada.

Duck says “it’s astounding” the government would want to abandon either the ice core collection or the ozone programs.

“It’s just the wilful destruction of capacity,” Duck said, adding that plenty of other science programs are about to be axed. Environment Canada is also said to be planning to eliminate a research group looking at aircraft icing issues and a laser radar network that monitors particles thrown into the atmosphere by polluters and volcanoes, like the Icelandic eruptions that have been grounding air travellers.

Climatologist Andrew Weaver, at the University of Victoria, says the cuts to federal science programs are “very dangerous and short-sighted.”

And he says university and private laboratories are incapable of picking up the slack.

“There are many reasons that you need government labs,” says Weaver.

“You need them to do science in the public good, you need them to do the kind of long-term continuous monitoring that will never get you tenure, that will not train students, but that is fundamental to science itself,” he says, noting that Environment Canada’s ozone work helped spur international protection of the ozone layer. “It’s a Canadian legacy.”

“The people making these budgetary decisions do not understand the value and importance of federal science,” says Weaver. He suggests the government could save money by cutting back on “the staggering levels of message control” now at work in many federal departments.

“Maybe if some of that could go, we might be able to keep some of our legacy science,” says Weaver.