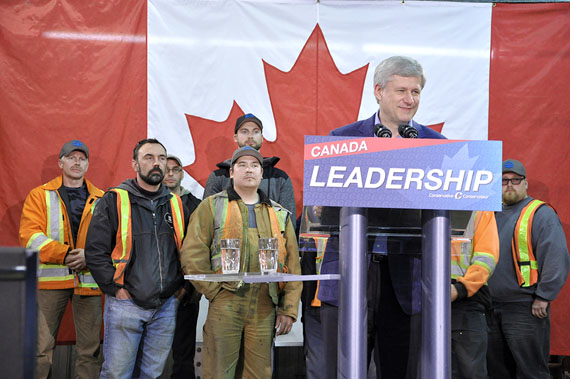 Conservative leader Stephen Harper speaks inside the Tower Arctic building at 1502 Federal Rd. in Iqaluit Aug. 14, while a group of Tower Arctic workers stand behind him. (FILE PHOTO) 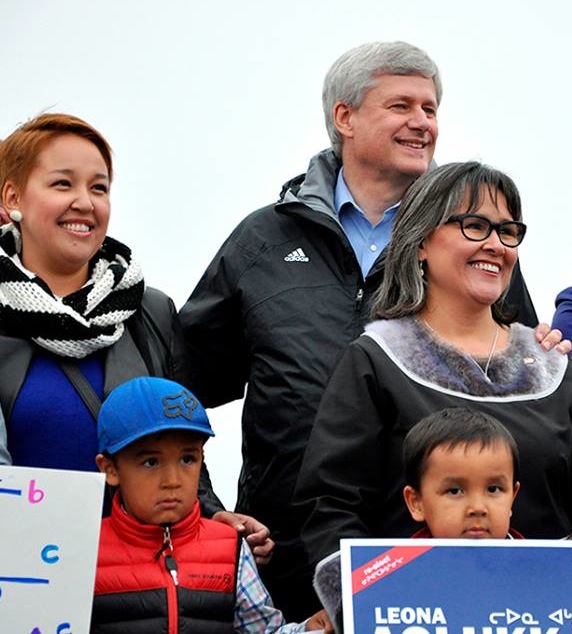 Prime Minister Stephen Harper at the Iqaluit airport runway shortly after his Boeing 737-400 charter plane touched down at around 4:50 p.m. Aug. 14. (PHOTO BY THOMAS ROHNER)

No glitches, no dissenters.

That’s how it went down in Iqaluit Aug. 14, when Conservative party organizers got Nunavut Conservative candidate Leona Aglukkaq’s re-election campaign off the ground with a quick in-and-out visit from Prime Minister Stephen Harper.

A group of hand-picked Conservative party supporters gathered with Aglukkaq under grey skies on the Iqaluit airport’s tarmac to meet him, bearing signs with messages in Inuktitut and English such as “qujannimik,” tungasugit,” “Welcome back PM Harper,” and “thanks for helping Nunavummiut.”

Harper got a quick tour of Sylvia Grinnell Territorial Park and then arrived at the Tower Arctic Ltd. building at 1502 Federal Rd. for an invitation-only speaking event.

There, Tower Arctic had blocked the entrance with a makeshift barricade of heavy construction vehicles.

And to compose their desired visual image, Conservative organizers placed a group of Tower Arctic workers, most of them clad in Tower Arctic ball caps and orange safety vests, directly behind the lectern where Harper spoke, in front of an enormous Canadian flag.

A construction and a multi-faceted general contracting firm with a lengthy history in the Arctic, Tower is a sub-contractor on the Iqaluit airport project, which is partly funded by a $77.3-million handout from P3 Canada, a federal agency.

It’s now deemed an “Inuit-owned” company and is classed as an aboriginal business under the federal government’s aboriginal procurement strategy.

In his speech, Harper kept a laser-like focus on one of his campaign’s big themes: national security and sovereignty.

To that end, he announced that, if re-elected, a Conservative government would expand the popular Junior Canadian Rangers program by 15 per cent, to 5,000 members.

Ottawa would finish that Junior Rangers expansion by 2018, the 20th anniversary of the program, Harper said.

Harper also said the Canadian Rangers will get to keep their trusty old Lee-Enfield Mk4 .303 calibre rifles after they’re replaced.

Ottawa is replacing the Lee-Enfields with the .308 calibre C-19, to be manufactured by Colt Canada in Kitchener, Ont., using a licenced design based on Finland’s Sako/Tikka T3 rifle.

“Their Lee-Enfield rifles will become a symbol of our nation’s gratitude for their dedication and commitment,” Harper said.

As he has throughout the campaign, the PM slammed his two main rivals, Liberal leader Justin Trudeau and NDP leader Thomas Mulcair, saying they’re weak and naïve on national security.

Harper also announced that Gjoa Haven, Aglukkaq’s home community, would get a Sir John Franklin centre for visitors, a development that would help the community exploit the publicity generated by the 2014 discovery of the HMS Erebus.

This past April, Parks Canada, part of Aglukkaq’s environment department, said they’re already talking to the Kitikmeot Inuit Association, Nunavut Tunngavik Inc. and the Nattilik Heritage Centre in Gjoa Haven about “how other Inuit organizations and communities can become engaged in and benefit from this exciting project.”

The Nunavut Liberal candidate, Hunter Tootoo, greeted Harper’s arrival with some jibes of his own, accusing the PM of “secrecy, control and manipulation.”

Tootoo and about half a dozen red-clad Liberal supporters also gathered at the airport to greet the Conservative leader and posted Liberal election signs at various strategic locations.

“It’s unfortunate that Nunavummiut expect these kind of “surprise visits” from their own MP, in their own territory,” Tootoo said in a statement.

“They’re only here to smile for the cameras, not to genuinely talk to people and make real change,” he said.

Earlier that day, in Hay River, Harper had announced $14 million to pay for the chip-sealing of a 68-km section of road that runs through Wood Buffalo National Park.

That prompted caustic remarks from the NDP incumbent candidate in the Northwest Territories, Dennis Bevington, who faces a strong challenge from Conservative candidate Floyd Roland, the ex-NWT premier.

“The Conservatives use northerners as backdrops for their photo-ops but their northern strategy has done more harm than good,” Bevington said in a statement Aug. 13.

The CBC poll tracker, based on Éric Grenier’s ThreeHundredEight.com poll aggregator site, shows that if an election were held as of Aug. 12, Mulcair’s NDP would win a slim minority victory with 121 seats and 32.3 per cent of the popular vote.

Grenier’s poll aggregate shows the Conservatives in a virtual tie with 120 seats and 29.3 per cent, while Trudeau’s Liberals would trail in third place with 95 seats and 27.3 per cent.

Another poll, released on the weekend by Léger Marketing and Le Devoir and Le Journal de Montréal, has the NDP leading nationally with 33 per cent, the Liberals second with 28 per cent, and the Conservatives third with 27 per cent.

Spencer Rocchi is contesting Nunavut for the Green party, while the NDP have yet to announce a Nunavut candidate.