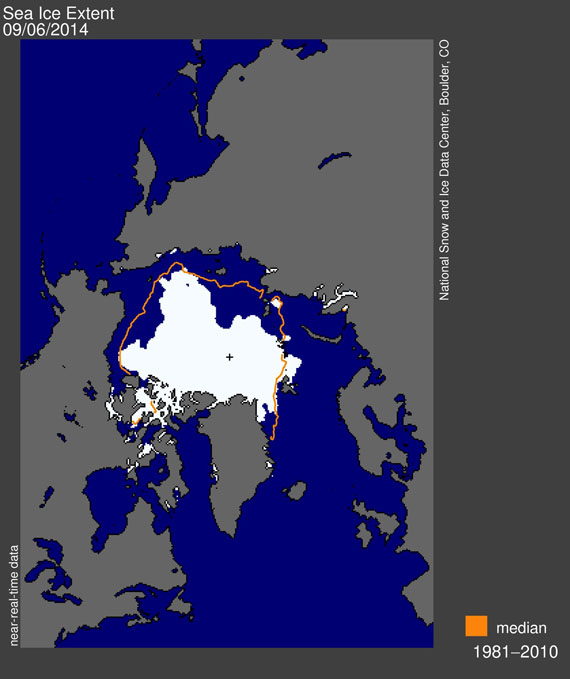 This map from the National Snow and Ice Data Centre shows heavy ice conditions on Sept. 6 in the Northwest Passage.

CAMBRIDGE BAY — Icebreakers and cruise ships travelling through the Northwest Passage encountered rough sailing conditions this past week: heavy ice closed the Queen Maud Gulf between the northern coast of the mainland and the southeastern corner of Victoria Island in Nunavut.

While the rate of ice loss during August in the Arctic Ocean overall in 2014 was near average, the Northwest Passage continued to be clogged with ice and was unlikely to open, the National Snow and Ice Data Centre said in its most recent Arctic ice report.

In those years, atmospheric conditions led to “minimal ice inflow from the Arctic Ocean,” the NSIDC said.

But this, as of the end of August 2014, ice-clogged areas in the passage were tracking above the 1981 to 2010 average, said the Colorado-based NSIDC, which bases its reports on satellite information.

The heavy ice conditions come as no surprise to crew and passengers on board the Austral.

The French-owned mega-yacht with 132 cabins, on a 22-day, $16,000-minimum per person-plus voyage from Kangerlussuaq, Greenland to Anadyr, Russia, was stopped in its tracks last week in the Queen Maud Gulf.

The yacht was due into Cambridge Bay on Sept. 6.

But the leader of the cruise wrote Cambridge Bay’s cruise ship organizer Vicki Aitaok Sept. 5 that the ship had to cancel its visit.

“We have a big problem for our stop in Cambridge Bay! The captain of the ice breaker Pierre Radisson (who open the ice for us), just advise us that he don’t want to continue the convoy during the night.  That means that now we are stopped in middle of the Queen Maud Gulf in middle of sea ice,” read the email posted by Aitaok on Cambridge Bay’s Facebook news page early Sept. 6.

Heavy ice conditions in 2014 also mean the Tandberg Polar tug and barge, now in Cambridge Bay, which will bring Amundsen’s ship, the Maud, back to Norway, postponed plans this year to raise the ship.

Overall, August 2014 ended up with the seventh lowest extent in the satellite record.

The ice that is clogging the Northwest Passage right now is mostly multi-year ice that breaking off from polar ice-packs and getting pushed in from the Arctic Ocean.

Even the circuitous route travelled by Norwegian Arctic explorer Roald Amundsen in 1905 and 1906 — when he became the first European explorer to successfully travel the route — was not entirely open, the NSIDC said.

Another cruise ship, the last of a season which saw has so far seen four cruise ships in Cambridge Bay, arrived on schedule Sept. 8.

That’s the One Ocean Voyage’s Akademik Sergey Vavilov, with 63 crew and 92 passengers, which participated in Parks Canada’s effort to locate HMS Erebus and HMS Terror, the ships lost on Franklin’s 1845 British Arctic Expedition.