“We are advising women to avoid eating ringed sealed liver” 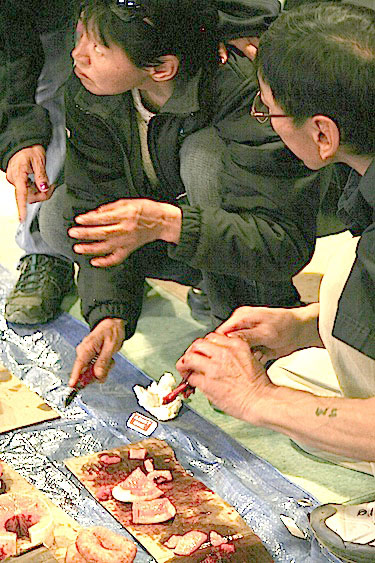 A June 28 feast at the Anglican Parish Hall in Iqaluit included country food — and information on why women of child-bearing age shouldn’t consume ringed seal liver. (PHOTO BY DAVID MURPHY)

You may want to think twice when slicing off a piece of ringed seal liver.

Five years after the 2007-08 Inuit Health Survey examined more than 1,500 Nunavummiut for a contaminants assessment, health officials are finally advising women of child-bearing age not to eat ringed seal liver.

That’s because even small amounts of ringed seal liver are packed with mercury, which can cause permanent brain damage and developmental delays in children whose mothers absorb too much mercury when they’re pregnant.

“Given that ringed seal liver is very high in mercury, that, in fact, almost half the mercury in women child-bearing age comes from eating just a small amount of ringed seal liver, we are advising women to avoid eating ringed sealed liver,” said Nunavut’s chief medical officer Dr. Geraldine Osborne June 28 about a health advisory issued by the health and social services department to women of child-bearing age.

“Simply cutting ring seal liver out of the diet will dramatically lower the risk of mercury [damage].”

Almost all mercury found in Arctic marine mammals, seabirds and freshwater fish comes from industry far to the south, mainly from metal and cement production in east Asia. Most is carried north by winds, ocean currents and rivers.

And for women aged 18 to 45, about half of that mercury comes from eating ringed seal liver.

The survey found Inuit eat an average of 39 grams — 0.086 pounds — of ringed seal liver per week.

Overall, blood samples from a quarter of the 1,564 Nunavummiut surveyed for the contaminants assessment showed mercury levels above the 20-parts-per-billion blood concentration limit set by Health Canada — the equivalent of 20 grains of rice in the blood stream.

Ringed seal liver consumption was the main source of those high mercury levels, it found.

But most adults shouldn’t worry too much about their mercury intake — Inuit in Nunavut have higher mercury levels in their blood compared to the rest of Canada, but these are still far below the 20 ppb guideline, public health officials said.

Pregnant women, however, should avoid ringed seal liver because of the damage that can result to an unborn child when a pregnant woman eats seal liver.

Childbearing-aged women in Nunavut should have half the amount of mercury in their blood which is normally considered safe, that is, only eight ppb.

Because it can take about two months for a human body to get rid of about half of its mercury, an unborn baby can still get heavy mercury exposure from mercury-loaded food that a woman eats before she gets pregnant.

That’s why the Government of Nunavut, Nunavut Tunngavik Inc. and the University of Ottawa are advising women of child-bearing age who may become pregnant, are planning to become pregnant, or are pregnant, to avoid eating ringed seal liver due to its high mercury content.

Instead, ringed seal meat is a healthy alternative, they say.

Overall most adults should not be concerned about contaminants in country food, said Dr. Laurie Chan, a toxicologist at the University of Ottawa, who participated in the contaminants assessment.

It also showed Inuit are exposed to high levels of the heavy metal cadmium due to smoking. High exposure to cadmium has been linked to toxic effects on reproductive health and on lung, liver and kidney function.

To inform the public of their findings, the GN and NTI hosted a June 28 evening feast at the Anglican Parish Hall in Iqaluit.

The GN also plans to issue public service announcements, pass information packages to health clinics across the territory, and create a video about the risks associated with eating seal liver as well.

But that won’t stop some from eating the liver.

“I eat ringed seal liver — it’s a delicacy,” said Elisapie Ikkidluak, who came to the feast.

Ikkidluak, who said she was aware of the high level of mercury before the information session, isn’t worried about the potential harmful effects of eating ringed seal liver.

“If you don’t eat ringed seal liver, you’re going to freeze when you’re out on the land, or out hunting. It strengthens the blood,” Ikkidluak said.

And in terms of taste, “it’s the best.” But she will warn her daughter, if she does get pregnant, about the potential harms of ringed seal liver.

“I would just tell her, ‘this is what could happen’. I’m not going to recommend that she doesn’t eat it, I’m just going to tell her what effects there are,” she said.

Symptoms of high-level mercury exposure include brain and kidney damage, tremors, lack of vision and hearing, and memory problems.

In the Arctic, mercury undergoes a process in the water, and turns it into deadly methyl mercury. This mercury accumulates in marine mammals which build up high levels of mercury.

Climate change is expected to pour more mercury into the Arctic environment through thawing permafrost, melting ice and snow and increased flows in rivers.

Less sea ice cover may also lead to changes in the diet of polar bears and seals, leading them to take in more mercury.

Knowledge about the presence of mercury in the Arctic food chain is nothng new: a report, called Arctic Pollution 2011, released in May 2011, said a “legally-binding global agreement” is needed to control mercury emissions in the Arctic.

The Arctic Pollution 2011 report’s authors say dietary changes are only a “short-term solution.”

The longer term solution is to take actions which will reduce the presence of mercury in the Arctic.