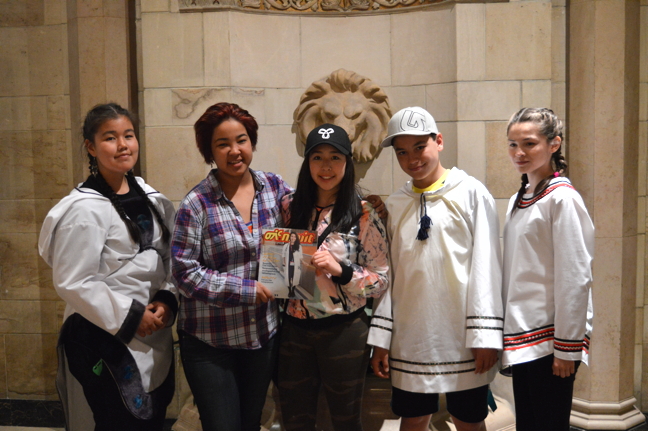 Some Inuit youth attending a financial literacy workshop in Ottawa June 20 hold up a copy of Nipiit magazine, published by the National Inuit Youth Council. From left: Hullik Kudluk, 14, from Kuujjuaq, Alassua Hanson, 15, from Iqaluit, Dakota Joss, 15, from Yellowknife, Sinasi Tasse, 14, from Kuujuaq, and Malena Gordon, 13, from Kuujjuaq. (PHOTO BY COURTNEY EDGAR)

OTTAWA — None of the youth who attended the Inuit Tapiriit Kanatami’s Summer Solstice Youth Exchange came from Cambridge Bay this year, although they wanted to come.

However, the airport’s gravel runway was too soft for any flights to take off so they couldn’t fly.

And when Cambridge Bay residents are unable to use the airport, that interrupts more than just vacation plans.

“If they don’t fly, they don’t eat,” said Brock Friesen, the president and CEO of First Air. “They don’t come to these conferences.”

Friesen was a panelist at “Infrastructure in Canada’s North: A Fresh Perspective,” an event hosted by the Economic Club of Canada June 20 at the Chateau Laurier in Ottawa.

Also a special guest speaker: Sophie Grégoire Trudeau, wife of Prime Minister Trudeau, who spoke about the importance of investing in the North and developing the human and business potential all over Canada.

“When you think that a third of Canadian land is up in the North,” Grégoire Trudeau said, “the possibility for clean business growth is crucial for this country.”

That event followed on the heels of ITK’s launch of its new financial literacy workshop and toolkit attended by 70 youth from around the North who took part in the exchange program this year.

It was an opportunity for Inuit youth to visit the nation’s capital, learn about their culture, attend the Summer Solstice Aboriginal Arts festival at Vincent Massey Park over the weekend — and start thinking about their futures.

The financial literacy project and toolkit was paid for, at least in part, by Indigenous and Northern Affairs Canada which, according to the INAC website, kicked in $83,145 for the project.

As for the workshop, it covered a number of subjects including the basics of banking — from how to open an account when there isn’t a bank in your community to telephone banking, pre-paid credit cards and the importance of a good credit rating.

Becky Kilabuk, youth programs coordinator at the Qikiqtani Inuit Association, and Rhiannon Traill, the president and CEO of the Economic Club of Canada, hosted that portion of the event.

They shared their own experiences with overcoming debt and how they nurtured their personal talents to build a career and generate an income.

The topic that generated the most interest was how health is directly related to finances and how personal well-being and education can turn out to the smartest investments for youth.

An example: The Aboriginal Peoples Survey from 2006 showed that roughly 63 per cent of adults aged 15 and over across the Arctic region smoke cigarettes daily. That’s $18 a day, or $42 million a year spent Arctic-wide on tobacco products alone. And an estimated half, not more, of Inuit in Nunavut smoke.

Kilabuk explained how quitting smoking gave her a financial boost.

“I was able to save enough to take a trip to Disneyland with my best friend and her son,” she said.

The Inuk teens who attended the workshop learned more than just financial literacy over the weekend — they learned about their culture too.

“You don’t get the opportunity to know much about it at school,” said Allasua Hanson, 15.

Dakota Joss, 15, from Yellowknife said that what she learned in the workshop will be helpful when she goes to her godparents’ place in Cambridge Bay this summer to look for a job.

She already has a bank account but most of her income so far has come from babysitting, she said.

Maranda Kootoo, 18, from Iqaluit, who has had a bank account for two years now and worked as a day camp leader, said she learned through the ITK workshop that the cost of living is a lot higher in the North than it is in urban centres like Ottawa.

And Kootoo also learned how to use a credit card — and credit interest rates.

That information might have prevented her from making a rash shopping decision recently.

“I bought my prom dress rushingly,” she said. “I’m trying to return it but they don’t do returns so I’ll have to just get a store credit instead and buy a new one.”