“The decision was already made. So we have to live with that” 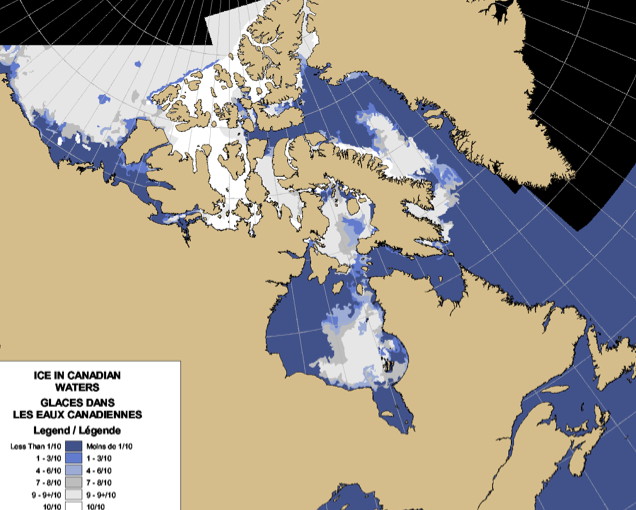 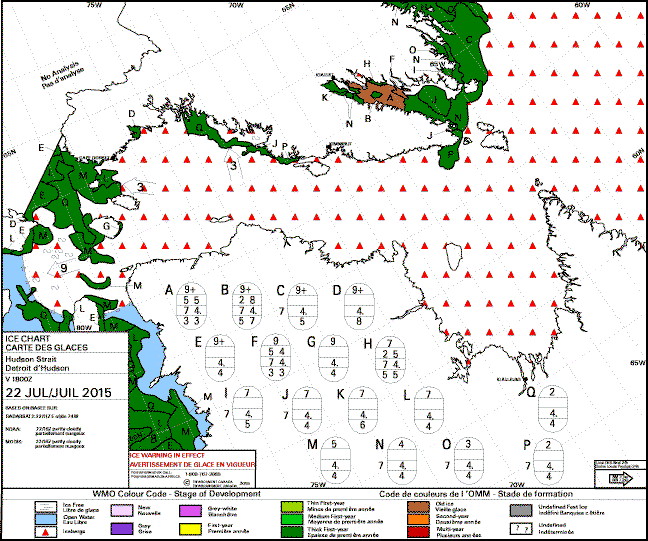 Arctic shipping companies and scientists are frustrated with the Canadian Coast Guard’s icebreaking services this year during one of the worst seasons of Arctic sea ice conditions in recent memory.

It’s customary for Canadian Coast Guard icebreakers to help sealift vessels and tankers navigate through treacherous ice and into northern communities this time of year.

But one of the Coast Guard’s heavy icebreakers turned its back on eastern Hudson Bay recently — even though that’s one of the worst areas for sea ice at the moment.

The CCGS Terry Fox sailed away from icy Hudson Bay waters for maintenance and resupply in Newfoundland last weekend in order to prepare for an upcoming United Nations Convention on the Law of the Sea mission.

The UNCLOS mission intends to claim seabed rights for Canada in the High Arctic, near the North Pole. The mission involves mapping Canada’s continental shelf which lies under ice at the top of the world to claim for Canada the North Pole and also potential oil and gas reserves there.

A smaller icebreaker, the CCGS Amundsen, outfitted to accommodate Arctic research, has been rerouted from its planned research mission to replace the CCGS Terry Fox and help sealift vessels navigate through the dense and dangerous ice.

That means scientists on board the Amundsen now have to put on hold dozens of multi-year research projects, some of which may be in jeopardy because of delays getting to their destination.

“Coast Guard understands that reassigning the Amundsen from science to Arctic resupply support is creating problems for the scientists,” said Johnny Leclair, assistant commissioner for the Coast Guard’s central and Arctic region.

Leclair said he’s been communicating with scientists on board who are part of ArcticNet — a network of scientists who study Arctic peoples and environments — to figure out how best to mitigate the impacts of this redeployment.

“Coast Guard had to assign the Amundsen to support shipping in eastern Hudson Bay in order to resupply communities from Akulivik down to Sanikiluaq because of ice conditions that are harsh,” he said.

“Coast Guard is aware of the impacts of science, but we believe the resupply of the Arctic for now is the top priority. Not that science isn’t a top priority, but choices need to be made,” Leclair said.

The CCGS Louis St-Laurent and the CCGS Terry Fox are the Coast Guard’s only heavy icebreakers, and they’re both going on the UNCLOS mission. The two ships are scheduled to leave St. John’s, Nfld., on July 26, Leclair said.

So what does this mean for those construction materials and fuel you’ve been waiting for? It means some of you will have to keep waiting.

“Honestly, the Terry Fox was pulled on Sunday night in what I call a very… in a manner in which I feel was unacceptable,” Paquin said.

“[The CCGS Terry Fox is] going on a federal mission to the North Pole. So she had to leave in order to do that mission,” she said.

The decision left sealift vessels “stranded” in Hudson Bay until July 22, she said.

“They left us all. We were all in Hudson Bay with no icebreaker in any way, shape or form, for two days. Which is completely unacceptable,” she said.

“I understand the priorities were set at the very high level at the federal government,” Rayes said.

Rayes, and others in the shipping industry, had complained about the decision two months ago.

“We had some objections to that plan earlier in May when we met with the Coast Guard and Transport Canada,” Rayes said.

“We, the industry at large, expressed our concern about that. But the decision was already made. So we have to live with that,” he said.

Meanwhile, northern communities are dealing with the costly headache that is Arctic shipping during a bad year.

“The [MV] Umiavut, she was three weeks waiting to get into Nunavik. Three weeks,” Paquin said. “That’s huge.”

Ships can usually count on Arctic waters being free of most ice during the month of July. But after a particularly long, cold winter, the ice hasn’t melted as quickly as it normally does and shipping companies have had to shuffle delivery schedules as a result

“Certainly we are very concerned about the schedules. I hear some communities on the Hudson Coast, they are at critical levels of fuel,” he said.

Akulivik, a Nunavik community of about 615 people, was days away from running out of diesel.

“If they [didn’t] refuel the tanks, we would run out tomorrow, on Thursday. That’s how close we were,” said Markusi Qinuajuak, manager of the Co-op store in Akulivik.

“The fuel is good now. We were just about to run out of diesel and finally we got the sealift,” Qinuajuak said.

“They let us know they were on their way. The only problem was the ice conditions. They said they were having help from the icebreakers. So I was not that worried.”

But communities such as Inukjuak are still waiting on their first sealift.

Inukjuak’s waiting for construction material for houses and to renovate a new recreation centre, as well as food supplies.

“Pop is running out,” Smiler said.

Both Rayes and Paquin said the level of service from the Coast Guard this year has been substandard.

Leclair said he understands why sealift companies are frustrated and that the Coast Guard will “have everything that’s available up there” soon.

One icebreaker, the CCGS Pierre Radisson, is currently at the mouth of Frobisher Bay in Iqaluit. The CCGS Amundsen is now in eastern Hudson Bay. And a third icebreaker is on its way from western Greenland.

The CCGS Wilfred Laurier is currently in the western Arctic doing “navigation and scientific work” and the CCGS Des Groseilliers is set to sail to the Arctic July 27 from Quebec City as well, Leclair said.

“It’s one of those years, it’s going to be tough. We’ll get the job done, but it’ll take a little more time,” Leclair said.