“The main concern amongst Inuit, non-Inuit, and the people of Canada is if this is an environmental concern or not” 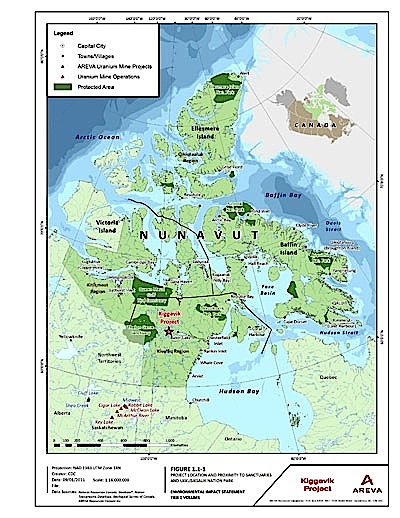 This map from Areva’s draft environmental impact statement on the Kiggavik mine shows the mine’s location. (FILE IMAGE)

The Baker Lake hunters and trappers organization doesn’t find much to like in Areva Resources Canada’s draft environmental impact statement on the proposed Kiggavik uranium mine project in the Kivalliq region of Nunavut, approximately 80 km west of Baker Lake.

And in a document tabled May 30 at the Nunavut Legislative Assembly, the HTO outlines its big concerns about the draft EIS, which it says Areva did not address or incorrectly addressed.

The HTO slammed Areva for:

• relying on scientific data too often from satellite collar surveys on caribou migrations;

• calling for a ban on the hunting of the Beverly caribou herd;

• using vague terminology about what constitutes a “significant environmental impact;”

• not including studies on how airplanes, exploration and other additional mines that will open up after the Kiggavik mine is built would affect caribou;

The HTO report said that “ever since the Meadowbank mine was built, caribou don’t stay near town as much as they used to.”

For Baker Lake MLA Moses Aupaluktuq, this poses as a problem, since Baker Lake relies on caribou to sustain itself.

“Caribou is one of our essential diets,” said Aupaluktuq. “If we’re talking about this one group of caribou herd being affected, that’s a primary concern for our livelihood and for our sustainability as well.”

However, Aupaluktuq wants people to stay open about the project.

“I think people should be open to discussion and be more open to the pros and cons of uranium mining,” he said. “The thing that people say in Baker Lake and Nunavut is that there’s a dire need for economic development and employment. But the main concern amongst Inuit, non-Inuit, and the people of Canada is if this is an environmental concern or not.”

Information requests will still be accepted by the Nunavut Impact Review Board until June 29, but its first round of public information sessions have now wrapped up.

Eight community information sessions about the draft EIS were held around Nunavut from May 22 to May 30. More than 200 people attended those meetings and more than 100 comments and questions were addressed, according to Areva’s manager of Nunavut affairs Barry McCallum.

“There were many calm, interested people and there were a few people with strong views who expressed them in their questions,” McCallum said.

The questions were mainly about the draft EIS, which was originally 10,000 pages, but shortened and translated into Inuktitut for the purpose of the information sessions.

A final EIS will be handed to the NIRB this coming November, with yet another review process coming after that.

There have been many calls by the environmental watchdog group Nunavummiut Makitagunarningit for a territory-wide vote on the uranium mine.

But McCallum said that if there were a vote tomorrow, Nunavummiut would vote in favour of the mine.

“The last time there was something like that was the winter of 2010 when the project proposal was revealed to the region,” said McCallum. “Five hundred people attended those meetings, about 375 filled out a questionnaire, and 76 or 78 per cent of those supported the project at that time. That was just two years ago. I don’t know how that would be today, but I don’t think it would be very different.”

Nunavummiut Makitagunarningit said that if Kiggavik goes ahead, it would open the door for many other uranium mines to open up — something McCallum acknowledged is a possibility.

“There’s other companies in the area as well. Most exploration projects never become mines. Clearly they all want to, so there could be another one or two. Some material has been found, but nobody has declared a deposit yet,” he said.