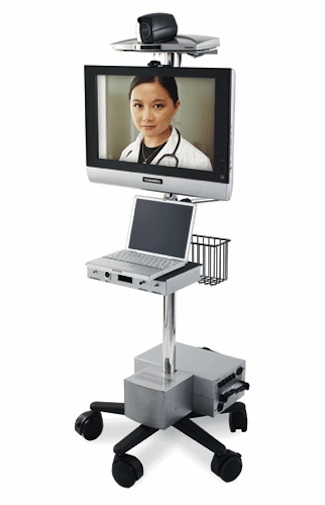 The Tandberg “intern” will be Nunavik’s tele-health connection to medical specialists in southern Quebec.

KUUJJUAQ — Don’t be surprised if you run into a doctor in Nunavik who looks almost like a robot, is about five feet tall, and has wheels for feet, a bar for a back, computer screen for a head and a camera for a hat.

It’s just one of the new “interns,” made by a company called Tandberg, which will make their appearance in community clinics and hospitals throughout Nunavik, said Wayne Labadie, the co-ordinator of information services for Nunavik’s regional board of health and social services.

They’ve already arrived at Kuujjuaq’s Tulattavik hospital and at the Inuulitsivik hospital in Puvirnituq, where they’re the most visible signs of changes in the delivery of health and social services in Nunavik.

The audio-visual hook-ups that are part of the tele-health carts or “interns,” as they’re sometimes called, will give each nurse or doctor in Nunavik instant access to the McGill University Health Centre — and their video conversations about patients will take place in real time on the screen.

The new system will provide more efficient access to laboratory results, quicker access to emails and the Internet, and, by March 2012, everyone in the health system will be able to consult electronic clinical records.

As a result, Labadie told counsellors Nov. 28 at the Kativik Regional Government meeting in Kuujjuaq, there will be less risk and better follow-ups for patients.

The improved telecommunications system is due to a five-year contract worth $9 million from Quebec’s Department of Health and Social Services with the KRG’s Tamaani Internet service provider.

And, after 18 months of preparation, the new and improved telecommunications system for health and social services facilities in Nunavik is ready to roll out.

But the new network will be separate, more secure, and provide the bandwidth needed by 29 health and social services points around Nunavik.

Youth Protection will see its own “locked-down,” secure system within the new network.

As a backup in case of a power failure, there will be a back-up generator in Kuujjuaq, and another one slated for Puvirnituq. A fall-back telecommunications network will be set up to avoid the kind of communications failure that crippeld Nunavut and other parts of the North on Oct. 6.

To maintain the new network, Tamaani has hired more staff to make sure everything runs smoothly, 24-7.

Tamaani users stand to benefit from the new network, too. That’s because if the health and social services doesn’t need all its bandwidth in the evenings, the excess will be available to users on the Tamaani network.

Tamaani clients will also see upgrades to their service, such as increased amounts of use and overall, which will be calculated on a monthly instead of daily basis.

But, until there’s a fibre-optic cable connection from southern Quebec to Nunavik, the speed of telecommunications in Nunavik still won’t be equal that of southern Quebec, KRG managers said.