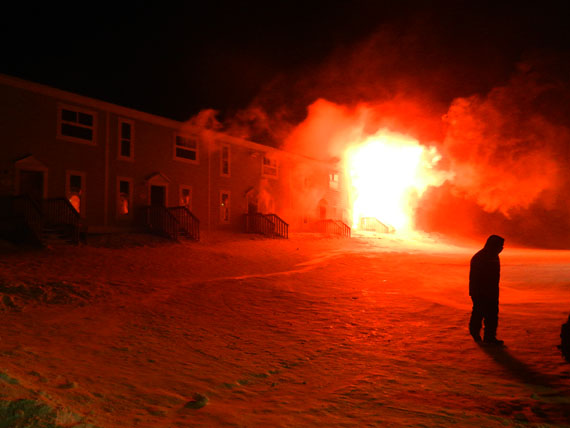 Flames pour from a rowhouse unit at Iqaluit’s Creekside Village complex on the evening of Feb. 26, 2012. By the morning of Feb. 27, fire had claimed two lives, destroyed 22 housing units and caused millions of dollars worth of damages. But in 2013, no fire-related deaths were recorded in Iqaluit and fires caused only $371,445 in damages. (FILE PHOTO)

For the first time in at least five years, nobody in Iqaluit died due to a fire in 2013.

That’s just one of the many hopeful statistics that fire chief Luc Grandmaison presented to Iqaluit city council on June 24.

In 2012, the fire department notched 46 fires with a whopping $9,253,665 in total loss damages — mostly due to the massive Creekside Village fire.

Grandmaison pointed out that the fire department is containing building fires mostly in the rooms the fire started in.

For the 23 house fires that occurred in 2013, 65 per cent of the time the fire department contains a fire at the source of origin.

And 26 per cent of the time, the fire is contained inside the building.

There was only one occasion, in November of 2013, that a fire spread to another building.

“For the longest time growing up here, as I can remember, when something caught on fire, it burned down,” Mansell said.

Smoking materials or open flames such matches started most of the 58 fires this year —26.

There were eight injuries to civilians and firefighters in 2013. Five of those injuries were suffered by firefighters.

At the end of the presentation, Coun. Terry Dobbin asked Grandmaison if there’s any psychological help available for emergency responders when they attend to tragedies, such as suicides.

Grandmaison said there is help for the workers in the form of an employee assistance program.

But he said a few months ago he had talks of getting more psychological access from outside the community as well.

“It is very hard for them. They see lots of tragedy, really. And that’s a fact,” Grandmaison said.

The fire chief said he’s been in discussions about bringing in more “neutral” help to those emergency responders who need it.

“They would dial a number to get outside help, not from local people. I believe that’s what’s missing for us to help us out,” Grandmaison said.