“I was completely shocked and surprised… I’m not happy” 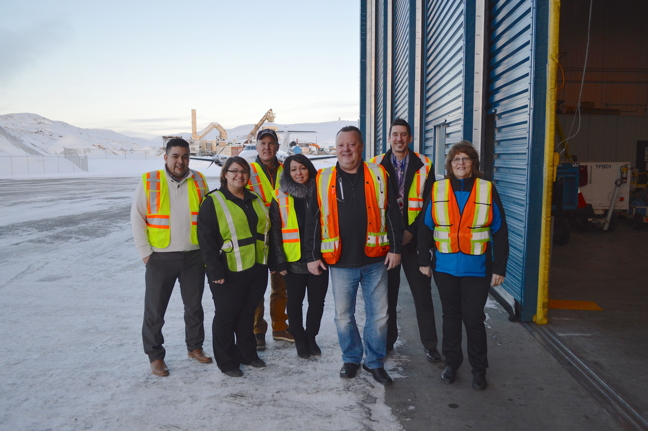 Canadian North President Steve Hankirk, centre front, vice president Peter McCart, back left, and some of the airline’s crew at their new hangar and office at the new Iqaluit airport terminal. (PHOTO BY STEVE DUCHARME)

Steve Hankirk, the president of Canadian North, says former partner First Air’s decision to abruptly end its controversial codeshare relationship with his company was as much of a surprise for him as it was for the rest of Nunavut.

In the wake of that unexpected announcement, Hankirk says the two previously chummy airlines now have what you might call irreconcilable differences.

“I was completely shocked and surprised,” Hankirk, told Nunatsiaq News from his airline’s hangar and office building near the new Iqaluit airport terminal, Dec. 2

Hankirk said he received no prior notice from First Air about the decision and learned about it through a news release, while sitting across a table from none other than First Air President Brock Friesen.

“I got told at a Vancouver lunch table heading into a board meeting with the Air Transportation Association of Canada—when I’m in there a press release goes out,” he said.

Hankirk defended his side of the codeshare arrangement—which provoked a chorus of complaints across Nunavut about overbooked flight, poor schedules and delays of freight and medical supplies—arguing that the policy cut costs and increased service.

Nunavummiut, Hankirk said, “didn’t trust” codeshare early on but he maintains the general mood, “had calmed down a lot.”

Nor does it mesh with First Air’s stated reason for ending codeshare—that people “simply didn’t like it” and complained heavily and frequently, First Air’s Friesen told Nunatsiaq News Nov. 24

“Brock [Friesen’s] phone must have rang a lot more than mine,” Hankirk said, suggesting that First Air’s actions had more to do with business—namely, pushing Canadian North out of the eastern Arctic.

“Frankly, I just thought they’d expect us to pull out and walk away. We’re not going to do that.”

In response, Hankirk says his airline is issuing a request for proposals for another Dash-8 aircraft as well as pushing forward plans to introduce another 737-300 jet to the Iqaluit-Ottawa route by January.

“What I’ve promised the community in Iqaluit and the communities in the region is I’ll be back here in the second week of January with a schedule we’re flying and we’ll post that schedule then,” Hankirk said, adding that “we’re not leaving the Baffin.”

Hankirk said he expects the new Canadian North schedule will look “very close to pre-codeshare” but “it won’t be exact.”

“The market in the North is finite. The economics still apply,” he said, which means ticket prices for Canadian North seats won’t change significantly.

First Air expects its fleet of six new ATR42-500 aircraft will be operational in early 2017, fully separating the airline’s passenger service from its cargo business.

“Their model is… quite frankly, I’m thankful I’m not having to make money with it,” Hankirk said.

“With the relatively low load factor that we live with, you have to be able to put cargo in the back.”

Immediately prior to the termination of codeshare, Canada’s Competition Bureau announced it was investigating both First Air and Canadian North for allegations of anti-competitive business practices.

Hankirk said he believes the bureau’s codeshare investigation will likely be dropped in light of the new developments, but the investigation into predatory pricing may continue, he added.

“The predatory pricing won’t go away, I think both ourselves and First Air are going to have to continue going down the path of providing all information [to the bureau],” he said.

“We’ve been dealing with it, we’ve provided absolutely everything they’ve requested and I’m 110 per cent confident, for Canadian North, we did no anti-competitive behavior.”

So, with the completion of Iqaluit’s new airport terminal expected by the end of the year, any chance of southern airlines migrating north? Hankirk says it’s possible.

“It we talk the big two, Air Canada and WestJet, I think there’s a possibility they could look at it,” he said, but stressed that he hadn’t heard any news on the subject.

“You hear the chat, but nothing that’s really said they’re coming.”

On Nov. 3, both Air Canada and WestJet independently confirmed to Nunatsiaq News that they have no plans right now to introduce service to Iqaluit “at this time.”

“My guess is, if they’re going to come, it’s when the terminal building opens,” Hankirk said.

Hankirk said Canadian North will honour the remainder of its codeshare commitments until the arrangement is phased out by the end of this year.