“It’s so inspiring to hear all the language, to see all the signage” 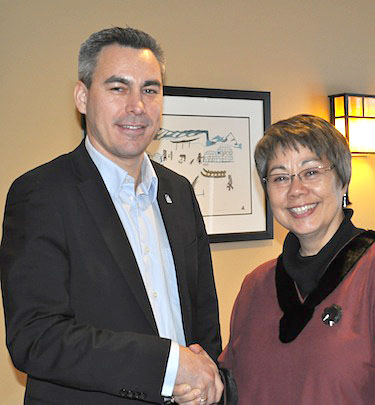 Nunavut Premier Eva Aariak and Greenland’s minister of education and research, Palle Christiansen, say goodbye after successfully co-hosting the Circumpolar Conference on Education for Indigenous People this week in Iqaluit. (PHOTO COURTESY OF THE GOVERNMENT OF NUNAVUT)

More than 125 educators and officials from Canada, Alaska, Norway, Greenland gathered this week at the Circumpolar Conference on Education for Indigenous People in Iqaluit, co-hosted by Greenland and Nunavut.

And if there’s any presentation that sums up the concerns of the indigenous delegates, it was a performance of the traditional Saami song-style known as “yoik” by keynote speaker Laila Aleksandersen Nutti, an assistant professor of education at the Saami University College in northern Norway.

“You’re not allowed to do it, not in the school system. And somehow that seems to have followed into the early childhood sectors,” Nutti said.

Another the other presentations that hit a chord with delegates: a talk by former Inuit Tapiriit Kanatami president Mary Simon, who presented a five-year research study on Inuit education called First Canadians, Canadians First: the National Strategy on Inuit Education.

Her message: kids need to show up at school everyday, well-rested and well-fed.

Simon said efforts to improve school systems will be “ineffective” if those basic needs aren’t met.

And attendance is also one of the biggest challenges for Inuit education, she said.

“On average students miss 28 days of school each year. The average aboriginal student misses over 41 school days, which is equivalent to missing two full years of school by the time a student reaches high school,” Simon said.

To get over this poor attendance record, Simon said Inuit need to stop blaming parents and show the value of education through a media campaign.

“The National Committee on Inuit Education has recommended that we begin with a national media campaign around education,” Simon said.

That includes using social media, videos, television, radios, news feeds and Inuit leaders to spread messages about the importance of showing up to school well rested and well fed.

Although that will cost money, “there is genuine support from organizations outside government,” Simon said.

Another keynote speaker, this time from Greenland, touched on how important it is to include culture in learning.

“In the individualistic based cultures, the dominant cultures of the colonizers, the spoken word is important and you do well if you stand up and out,” Aviâja Egede Lynge from the University of Greenland said.

“Inuit, like many other indigenous peoples speak after seeing the whole picture inside, and Western people speak until the picture becomes visible,” Lynge said.

For Jana Harcharek, an Iñupiat educator in North Slope Borough school district, being in Iqaluit meant seeing things that could be used in her home town of Barrow.

“It’s so inspiring to hear all the language, to see all the signage,” Harcharek said.

“At home we’re having to raise a new generation of second-language speakers. And to be able to go home and say, ‘you know that over in Nunavut, Iqaluit, their language is still very strong, to bring that home will be very uplifting for our people.”

In his closing remarks, Greenland’s minister of education, Palle Christiansen, said he was “looking forward to get back home to the rest of [my] staff to tell them about the experiences we’ve [had].”

Nunavut’s premier and education minister Eva Aariak said that discussions with circumpolar leaders of education would continue long after the conference.

“Our conference has come to an end. But our collaboration as circumpolar partners, will not,” Aariak said.

Circumpolar education leaders are now working on a memorandum of understanding to “stay connected, share information, and ensure we keep this momentum moving forward,” she said.