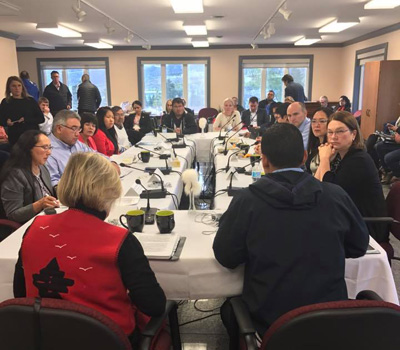 Inuit and federal leaders met last week in Nain, Nunatsiavut, to put into motion a handful of new initiatives to tackle tuberculosis, climate change and a lack of early childhood education across the Inuit Nunangat.

Discussions were led by Inuit Tapiriit Kanatami president Natan Obed and Carolyn Bennett, the minister of Crown Indigenous Relations and Northern Affairs, at a Sept. 29 meeting of the Inuit-Crown Partnership Committee.

This is the second time the committee has met since it formed last February, with the goal of fostering a new working relationship between Canada’s Inuit and the federal government in Ottawa.

The latest meeting of the committee, Sept. 29, came on the heels of ITK’s annual general meeting in Nain.

Among the committee’s discussions, leaders pledged that day to establish a task force to create and implement a strategy for eliminating TB in Inuit Nunangat.

This comes just a few weeks after Canadian health advocate Stephen Lewis called on the federal government to invest more into fighting the disease across Canada’s North.

In September, Lewis paid a fact-finding visit to Nunavut—a territory where 14 of 25 communities are dealing with active or latent cases of TB.

The Inuit-Crown Partnership Committee said it will also look at how to improve early learning and childcare options rooted in Inuit culture and language.

The plan will define Inuit involvement on issues like wildlife management, Indigenous guardians programming and participation in the upcoming United Nations Framework Convention on Climate Change Conference of the Parties 23.

“This Committee is an important vehicle through which Inuit are taking sustained action in partnership with the federal government to monitor and advance our shared priorities,” Obed said in ITK’s 2016-17 annual report, available here.

Though the committee’s work is still in its infancy, ITK President Natan Obed called its creation the “most transformative change initiated by Inuit” over the last year.