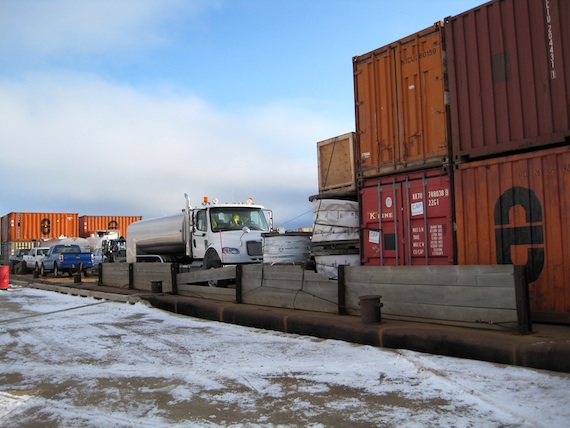 A load of vehicles and sealift containers sit on a Northern Transportation Co. Ltd. barge at the Cambridge Bay dock in late September of 2014. (FILE PHOTO) 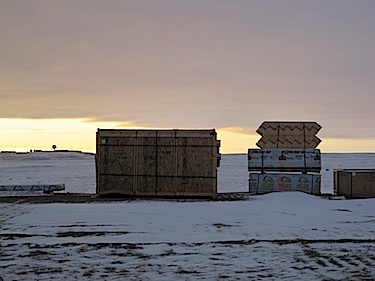 Due to NTCL barge delays in 2014 in Cambridge Bay, materials intended for a private four-plex construction project never arrived, and other materials remained crated outside on the lot, postponing construction for a full year. (FILE PHOTO)

Burdened by many tens of millions of dollars worth of losses and debts it can’t pay, the Inuvialuit-owned Northern Transportation Co. Ltd. has turned to the courts for protection against its imminent demise, court documents filed last week in Alberta reveal.

In a sworn affidavit filed April 26 at Alberta Court of Queen’s Bench, Kyle Barsi, NTCL’s vice president of finance, said the stricken company cannot pay its suppliers, employees or lenders and requires court protection while it raises money to continue operating during this year’s Arctic shipping season and looks for a way to restructure and survive into the future.

“IDC has had to financially support NTCL in excess of several million dollars per year in recent years and it cannot continue such support, consistent with its mandate to protect and preserve funds for future generations of Inuvialuit,” the document said.

Until 2014, NTCL was owned on a 50-50 basis by the Nunavut Inuit birthright firm Nunasi Corp. and by IDC, through their holding company, Norterra Inc.

But in 2014, Nunasi unloaded its 50 per cent interest in Norterra, which also owns the Canadian North airline, and the IDC continued on as NTCL’s 100-per-cent owner.

Nunasi and IDC bought the company in 1985 from the federal government, which had operated NTCL as a Crown corporation since 1944 and sold it during a wave of privatizations ordered by Brian Mulroney’s Progressive Conservative government.

Now the company is virtually worthless, and owes far more than the value of its assets.

The company now carries $120.6 million in liabilities, against assets that are estimated at only $44.8 million, court documents said. But the actual market value of those assets has not yet been determined.

One if its biggest debts consists of loans totalling $71.9 million owed to a syndicate of three banks.

They also owe $32.39 million to IDC, who propose pouring another $9.3 million into NTCL this year to help them continue to function during the 2016 shipping season.

The company’s defined benefit pension plan for retired workers may also be in jeopardy: their pension fund now carries a $19-million deficit.

Meanwhile, the company has asked the Alberta court for protection against its creditors until after it finds ways to cut operating costs and restructure.

They want court permission to spend up to $436,500 on certain “critical suppliers” for essential goods and services that NTCL requires to keep operating this year.

They also want permission to pay bonuses to eight “key” employees worth 10 to 25 per cent of their salaries, through a plan called “Key Employee Retention Plan,” or KERP, whose purpose is to “incentivize and retain certain employees.”

The details of that scheme are secret, contained only in a confidential document that NTCL wants the court to seal, an act that would make the document secret for good.

As for its proposed restructuring effort, NTCL hired a company called Blackhill Partners, based in Dallas, Texas, to help figure out what to do.

And during that process, which is likely to start soon, it appears as if all options are on the table.

With Blackhill’s help, court documents said, NTCL will try to restructure itself as a “going concern.”

That could include “terminating or renegotiating agreements,” a likely reference to NTCL’s collective agreements with the three unions that represent its workers, as well as “rationalizing debt.”

Another alternative is “sell all or part of the business,” court documents said.

The PricewaterhouseCoopers accounting firm has been hired to monitor the restructuring process, court documents said.

Documents related to NTCL’s insolvency are available to the public on the PricewaterhouseCoopers website.

NTCL’s shipping operations once extended from Churchill, Manitoba and the Kivalliq region to the North Slope of Alaska.

But in 2002, they lost a major eastern Arctic fuel distribution contract with the Government of Nunavut to the Woodwards Group of Happy Valley, Labrador, who outbid them by a margin of at least $19 million a year.

As well, the “bad gas” fiasco of 15 years ago, which occurred when NTCL vessels delivered gasoline to Nunavut that destroyed snowmobile engines, led to years of litigation between NTCL and the GN.

Last year, NTCL lost a barge that broke away from its tug while en route to Tuktoyaktuk. The barge drifted through the Arctic ocean and ended up in Russian territory, raising questions about environmental threats posed by commercial shipping.

They have suffered numerous other debilitating headaches, which include:

• new rules that require double hulls on Arctic marine vessels, which has increased their costs;

• low water levels in the Mackenzie River, which have required the use of more barges and more fuel to carry the same amount of goods;

• a big decline in mining and oil and gas activity in the Northwest Territories;

• low interest rates that have hurt the performance of their employee pension fund;

• the expansion of roads in the NWT, especially the Mackenzie Highway, creating declining demand for marine transport; and,

This year, the company said it will focus only on its “core business” serving the Mackenzie Valley and the Inuvialuit settlement area, court documents said.

Some customers in the western Nunavut hub of Cambridge Bay had already turned to competitors after a 2014 cancellation in the arrival of a barge created headaches for the GN and business customers.

Peter Laube, owner of Kalvik Enterprises, a construction company in Cambridge Bay, was among those who suffered losses in 2014 when NTCL’s barge never made it into the community. He stuck with NTCL in 2015.

But in 2016 he said he’ll be using another sealift company, because NTCL’s precarious financial position could jeopardize the delivery of his materials.

With files from Jane George and Jim Bell