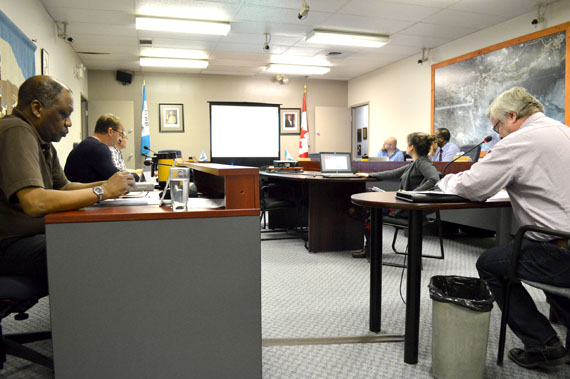 Fossil fuel consumption at Iqaluit’s power plant could be reduced by almost a quarter in the next few years, if a new wind energy pilot project pitched by the Qikiqtaaluk Business Development Corp. to the City of Iqaluit proves successful.

The city’s lands and planning committee, during a meeting March 6, green-lit construction of a pole—serving as an analog for a wind turbine—that will collect wind and climate data over the next two years.

“With three turbines and battery storages, there is a potential to displace approximately 25 per cent of the current diesel used for electrical generation,” a QBDC spokesperson, Sheldon Nimchuk, told members of the committee during a presentation.

That’s according to a report by the Qulliq Energy Corp., which identified Iqaluit and Sanikiluaq as the two communities in Nunavut with the greatest potential for wind energy, Nimchuk said.

“QBDC recognized the economic development opportunity of wind energy for Iqaluit,” he said.

A roughly 60-metre pole will be erected about 2.6 kilometres northeast of Apex in an area that computer simulation models say is ideal for sustained wind.

The proposed pole won’t have the recognizable propellers of a wind turbine: instead it would house a series of weather and wind gauges located roughly where the future turbine would be installed.

If the pilot data shows promise, extensive environmental impact studies and consultations will take place to consider a turbine, Nimchuk told the committee.

Funding for the project has already been secured from Indigenous and Northern Affairs Canada, the Qikiqtaaluq Corp., and Bullfrog Power—a Toronto-based green energy company.

Tugliq Energy Co. was contracted to perform the wind data collection and assessment.

According to Nimchuk, Tuglik was also involved in a successful wind turbine project at the Raglan Mine in Nunavik.

In the roughly 28 months during which a wind turbine has operated at the Raglan Lake site, it “displaced approximately 5.6 million litres of diesel,” Nimchuk said.

“During that time they’ve had above 95 per cent efficiency… in the distribution of wind energy to the mine,” he said.

“All indications are they’re having very good success with the type of turbine, which would be similar to the size of turbine considered for Iqaluit.”

“This is a good project… its good that at least people are thinking about it,” Coun. Kuthula Matshazi, who also chairs the city’s economic development committee, said prior to the planning committee’s unanimous vote permitting the test pole’s installation.

Iqaluit’s City Council will still have final say on the project’s construction.

The Nunavut Impact Review Board will also need to sign off on the test pole, following a screening, Nimchuk noted.

Pending that, Nimchuk said the QBDC will attempt to install the pole sometime between mid-March and mid-April this year.