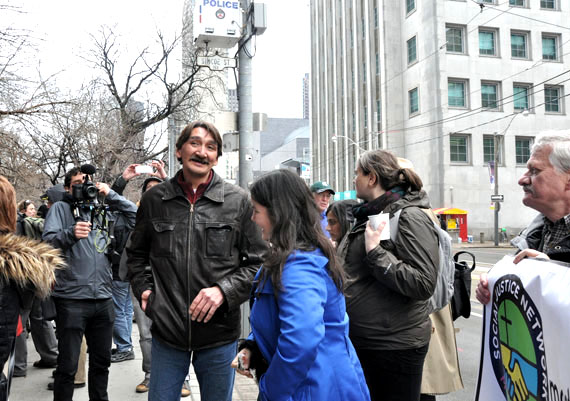 Clyde River’s Jerry Natanine outside the Federal Court of Appeal in Toronto in 2015. Nunavut Tunngavik Inc., Makivik Corp. and the Inuvialuit Regional Corp. will all intervene on the Hamlet of Clyde River vs. Petroleum Geo-Services Inc. appeal when it appears before the Supreme Court of Canada later this year. (FILE PHOTO)

Inuit birthright organizations in three of Canada’s four Inuit regions have been granted intervenor status in a federal court appeal over seismic testing in Baffin Bay and Davis Strait.

Nunavut Tunngavik Inc., Makivik Corp. and the Inuvialuit Regional Corp. will all intervene in the Hamlet of Clyde River vs. Petroleum Geo-Services Inc. appeal when it appears before the Supreme Court of Canada later this fall.

That status will allow the three organizations to provide submissions and arguments in the case.

During Inuit Tapiriit Kanatami’s recent general meeting in Kuujjuaq, NTI said its goal is to ensure the Crown’s duty to consult with Inuit and any Indigenous group potentially impacted by development.

“A primary objective for us is making sure the Crown’s duty to consult doesn’t somehow ‘fall between the cracks’ when the decision making process is divided between the role of an arm’s length tribunal and government ministers,” NTI said in its speaking points.

The Clyde River case stems from a 2014 National Energy Board decision to allow a Norwegian group of companies to conduct five years of seismic testing in Baffin Bay and Davis Strait.

That involves pulling sonar equipment behind a boat to emit explosive blasts every 13 to 15 seconds and recording the echo, to identify the potential location of hydrocarbons beneath the seabed.

But Inuit communities in the region have long expressed concerns over the impact the explosive surveying could have on the marine wildlife they harvest in the region.

The Hamlet of Clyde River, then-mayor Jerry Natanine and the Nammautaq Hunters and Trappers Organization appealed that decision in mid-2014, only to see the Federal Court of Appeal rule in favour of the seismic companies in 2015.

But the Supreme Court agreed earlier this year to hear an appeal from Clyde River Inuit in their bid to stop the controversial testing program off the coast of Baffin Island, near the community of 950.

At the same time, the seismic companies have agreed to postpone the testing until 2017, in order to hear the outcome of the hearing.

The Supreme Court has agreed to hear the Clyde River case along with another appeal—that of the Chippewas of the Thames First Nation near London, Ont., which have asked the court to halt the expansion of an Enbridge pipeline through their traditional territory.

The Supreme Court will hear those cases jointly on Nov. 30 in Ottawa, although the proceedings are usually webcast or broadcast on CPAC.

But the court denied a number of intervenor applicants including Inuit individuals such as Senator Charlie Watt (Nunavik) and retired Nunavut leaders Rosemarie Kuptana, Peter Ittinuar and Tagak Curley.

The court also dismissed intervenor requests from Amnesty International and the National Energy Board.

Intervenors must submit written factums, or positions, up to 10 pages in length by mid-November. The court will decide then decide if those groups can make oral arguments at the hearing.