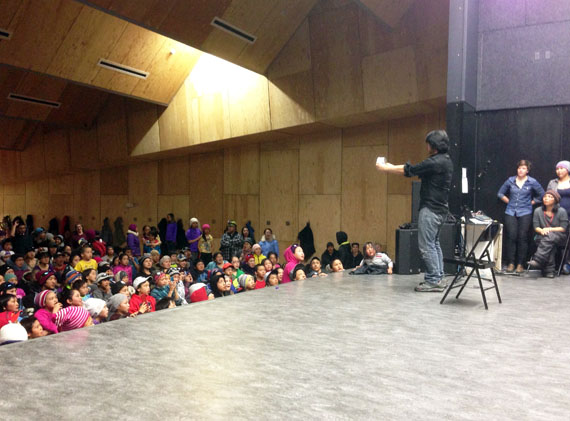 Jimmy Tommy Kumarluk from Kuujjuaraapik, a magician with the Cirqiniq program, performs his tricks in Igloolik earlier this month. (PHOTO COURTESY OF THE KRG) 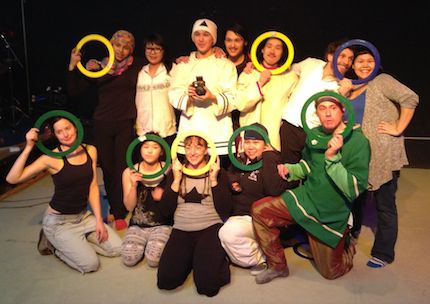 Performers from both Cirqiniq and Artcirq pose together at Igloolik’s Black Box theatre space during a week-long workshop. (PHOTO COURTESY OF ARTCIRQ)

When the Igloolik-based circus group Artcirq first got wind of a new circus program being launched in the region of Nunavik, its members were excited.

“It was pretty motivating for us, to imagine other Inuit working on a circus project,” said Artcirq’s founder, Guillaume Saladin.

That was in the mid-2000s. It wasn’t until a few years later that the Kativik Regional Government officially rolled out its social circus program, delivered through the Cirque du Soleil’s outreach program, Cirque du Monde.

That program, called Cirqiniq, is now up and running in Nunavik communities.

It was only in 2014 that the two Inuit circus groups finally met, thanks to a Canada Council for the Arts grant.

Artcirq hosted six Cirqiniq performers and their trainers in Igloolik in the spring of 2014, which Saladin called “an awesome experience.”

“We were all just wishing it could last a little longer,” he said.

The two circus troupes reunited for a second time this past month in Igloolik, where, in the Black Box, Artcirq’s training and performance space, they shared tips combining their creative efforts.

“There’s really something about the two groups coming together, they’re just very similar, but so different, too,” said Cirqiniq senior trainer Rebecca Leonard, who travelled with six young Nunavimmiut performers to Igloolik April 13 to April 19.

“The common language is just circus for us, so we just went right into it,” she said.

Cirqiniq and Artcirq’s core group of 10 performers spent the week working on a cabaret style performance.

Each group brought something different to the mix. The older group, Artcirq, has a stronger background in live performance, its members having travelled to perform around the world, Leonard said.

The group is much more rooted in traditional Inuit culture, she said — from its music, costume and delivery — something Cirqiniq aspires to. Artcirq, for example, incorporates live music into its performance, while Cirqiniq uses recorded music as it backdrop.

“The circus is good at going into different cultures and adapting parts of its into its practice,” she said, naming elements like throat song, legends or Inuit games.

Circus also shouldn’t be limited to youth, Leonard said, pointing to Artcirq’s adult members, some of whom have young children who take part.

“Typically, Cirqiniq has been geared towards youth in Nunavik, but it’s important to show them that circus performance can actually be a lifestyle,” she said. “I think they can see the potential of building an artistic practice.”

Six youth from four Nunavik communities took part in the workshop: Naomi Sala and Gerard Airo from Kuujjuaq, Charlie Luuku and Maina Mark from Ivujivik, Markii Tulugak from Puvirnituq and Jimmy Tommy Kumarluk from Kuujjuaraapik, who has made a name for himself as a talented magician.

But Cirqiniq has its own strengths; performers brought straps with them to Igloolik to show Artcirq performers how to do aerial work and dance trapeze.

“Cirqiniq has access to a lot of costumes,” Saladin said. “And they do character work, so we learned about building characters on stage.”

The week-long workshop ended with a handful of joint circus performances: one at the local high school and two public shows at the Black Box, which drew about 150 people each time.

“It was short,” Saladin said of the visit. “But when they leave, their techniques stay.”

Organizers with both Cirqiniq and Artcirq agree though, that if they can find the funding, they would love to develop a more permanent partnership between the two circus programs.

“It’s really nice to have that collaboration,” Leonard said.