“We’ve been asking for years for less invasive research methods” 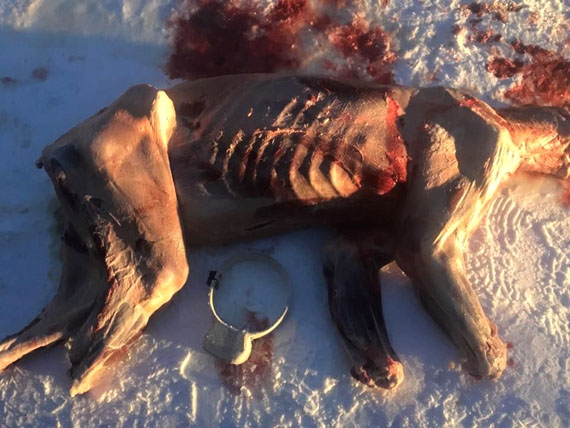 An Arviat hunter took a photo of this emaciated polar bear, its paws, head and skin already removed, after it was put down outside of Arviat Nov. 22. The female had recently been fitted with a collar to track her movement. (PHOTO BY TONY ULUADLUAK)

Nunavut Inuit say they’re concerned about the arrival of a skinny and collared polar bear along the western Hudson Bay coast last week.

The emaciated female adult polar bear had been spotted trying to walk into the community of Arviat a few times this month before she was euthanized by Government of Nunavut wildlife officers Nov. 22.

“I thought, holy smokes, that bear is pretty skinny,” said Tony Uluadluak, an Arviat hunter and hamlet bylaw officer who arrived on the scene after wildlife officials had put down the polar bear.

“I saw the bear earlier in the dump and out towards the dog teams,” he said. “They had no choice. We don’t like to see an animal suffer.”

Residents reported that the polar bear showed signs of aggressive behaviour, and was barely able to walk.

The female polar bear was also fitted with a tracking collar around her neck, reportedly put on the polar bear in Churchill, Man., before she began her migration north.

Uluadluak, like many other Inuit in the community, are wary of wildlife being fitted with tracking devices. They believe the collars interfere with the animals’ natural patterns and ability to source food.

There’s no way he can be certain this particular polar bear suffered because of her collar, but Uluadluak suspects it played a role.

“Just by the measurement of the collar and the size of its neck, it looked like it starved,” he said.

Community members say the polar bear was collared in Churchill this past September through an Environment Canada research program.

The female had two cubs at the time she was collared, although Arviat residents say there has been no sign of the cubs near the community.

Environment Canada did not respond to a request from the Nunatsiaq News for information about the collaring practices.

Joe Savikataaq Jr., a wildlife officer in Arviat, got the call Nov. 22 that the emaciated polar bear was just south of town, near the gas station.

His department had already given the okay to staff to euthanize the bear, if encountered, since the bear looked ill and had been aggressive.

The department has a policy that allows for euthanasia in cases where wildlife appear to be suffering or have a low chance of survival. In this case, the polar bear met that criteria.

“That bear was discovered when it tried going into town multiple times,” Savikataaq said. “It was very skinny, sick and limping.”

Hunters took samples of the polar bear to send off for analysis to determine the animal’s cause of death.

Savikataaq couldn’t say if the collar played a role.

“It’s possible it could have affected her,” he said. “A collar isn’t natural. But I can’t prove it.”

Arviat has seen a lot of polar bear traffic coming through the community this year, Savikataaq noted, and occasionally those polar bears are thin—collared or not.

But James Eetoolook, the acting president of Nunavut Tunngavik Inc., said this isn’t the first time a collared polar bear has died from apparent starvation in Nunavut.

“The collared ones always end up like this,” Eetoolook said.

“We’ve been asking for years for less invasive research methods,” Eetoolook said. “We try to have as much input as possible [in wildlife research]; we try to ensure that traditional knowledge is included.

“Talk to hunters—they’re out on the land all the time.”

Nunavut hunters have contact with these bears regularly, he noted; hunters are often called upon to retrieve collars if they’ve come off or when an animal has died.

A 2014 study led by the United States Geological Survey suggested that tranquilizing, handling and collaring polar bears does not inflict any negative long-term harm on the animals.

But in the case of the polar bear euthanized in Arviat, Eetoolook said he hasn’t seen a bear so thin.

“It shows that the polar bear was in poor health,” he said. “The stress on the bear was enormous, raising and feeding two cubs. It really bothers us.”