Glencore hopes to extend Raglan’s life to 2040 and beyond 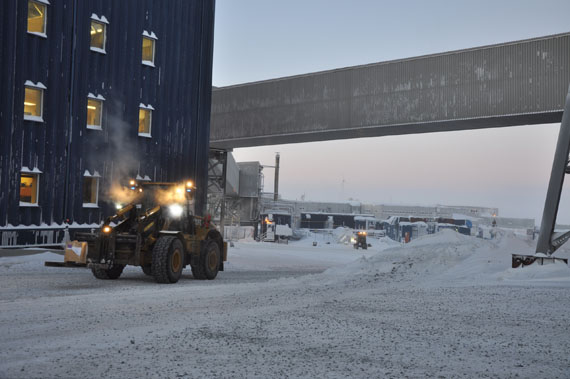 A front loader drives through the Raglan mine site in 2015. As the mine’s current operations begin to wind down, Glencore plans to expand the mine’s lifespan to 2040 and beyond with the addition of five new underground mines across Nunavik’s nickel belt. (PHOTO BY SARAH ROGERS)

The mining sector might be key to the health of Nunavik’s economy, but Makivik Corp. says Glencore’s Raglan mine has yet to deliver its full potential of benefits to the region.

The Kativik Regional Government has other concerns; the KRG says it wants better communication and access to documentation from the region’s environmental and social impacts review body, which evaluates development projects in the regions.

Nunavik’s regional organizations made their comments in written briefs submitted to recent hearings into the Sivumut project, plans to expand Glencore’s Raglan nickel mine operations past 2020.

The Kativik Environmental Quality Commission hosted public hearings on the proposed project in Salluit and Kangiqsujuaq between April 3 and April 6.

Glencore’s Raglan, which first went into operation in 1997, operates four mines—Katinniq, Mine 2, Kikialik and Qakimariurq—on a property 60 kilometres west of Kangiqsujuaq and about 115 southwest of Salluit.

As those operations begin to wind down, Glencore plans to expand the mine’s lifespan to 2040 and beyond with the addition of five new underground mines across Nunavik’s nickel belt.

The first phase of Glencore’s expansion would include two underground mines, called Mine 14 and Donaldson mine, which would operate roughly from 2020 to 2035.

The exploitation of three new underground mines, Mine 8, Boundary and West Boundary, could extend production from 2032 to 2040 and beyond, Glencore said in a project summary.

The Phase II and III mines would operate with much of the same infrastructure already in place on Raglan’s property, including the Katinniq complex, which houses accommodation for workers, the mine’s concentrator and sewage system, along with the 150-kilometre road network, which connects that site to the Donaldson airstrip and the mine’s port at Deception Bay

But with both phases planning a yearly production rate of about 1,350,000 tonnes of ore, Raglan would have to expand its tailings storage facility and water treatment capacity.

Ensuring environmental protection and benefits for Inuit have always been key issues for the KRG, which called Glencore “a responsible corporate citizen.”

The regional government also stressed the need to continue to engage with Nunavik Inuit.

“As Nunavik’s economy continues to evolve with developments like the Raglan mine, it is critical for us to ensure that the communities and regional organizations have the tools to remain directly engaged in the management and mitigation of these projects,” KRG chair Jennifer Munick told the hearings.

But the regional government expressed concerns about a lack of information sharing ahead of the April hearings, including access to supporting documents through the KEQC’s website.

The commission only recently posted a February letter from its chair, Peter Jacobs, to Glencore, at a recent meeting of a Sivumut project review committee.

“The KRG had no input in the discussions that were taking place,” the KRG said in a written submission. “In the future, the KRG must be represented in any discussions and decisions made that involve our mandates or authorities.”

Other issues raised in the KRG’s submission:

• the regional government said it has some concerns about the possible construction of roads connecting the nearby communities of Kangiqsujuaq and Salluit to the mine site. The KRG recommended that, where possible, roads be accessible to the public and safety standards are maintained in accordance with provincial regulations;

• in line with the KRG’s desire to see a continued and active engagement with Inuit, the organization recommended seeing more community monitoring projects and recommended Glencore consider implementing the Indigenous Guardians program which monitors ecological health, culture sites and sensitive species in the mining region; and,

• with Phase III set to begin in 2032, the KRG said it does not suggest the company prepare a new Environmental Impact Statement; rather, “approval could be made conditional on certain matters being brought up to date,” the organization said.

Makivik, Nunavik’s Inuit birthright organization, said new development at the mine should mean new efforts to increase Inuit job access on the mine site.

Glencore has worked to achieve 20 per cent Inuit employment at Raglan, as laid out in the initial Raglan agreement, though it hasn’t always maintained that level.

Makivik says there should also be room for more Inuit-owned business servicing the Sivumut project.

“Only about 26 per cent of contracts, supplies and services contracts at the Raglan mine are allocated to Inuit enterprises,” the organization said in its written submission.

“Makivik strongly reiterates that further efforts must be deployed to increase this figure and additional initiatives should be put in place to promote the emergence of Inuit entrepreneurship.”

For its part, the Kativik Environmental Quality Commission is currently in the midst of a staffing change and plans to relocate its offices from southern Quebec to Kuujjuaraapik in the coming weeks.

A KEQC staff person said more documentation on the Sivumut project review will be posted as soon as it’s been translated into French, English and Inuktitut.

Next, the KEQC will evaluate the project before issuing a decision, the final approval of which will be given by the Quebec government.

You can see a full copy of Glencore’s Environmental and Social Impact Assessment here.