“There was no system to ask the family: how can we help you?” 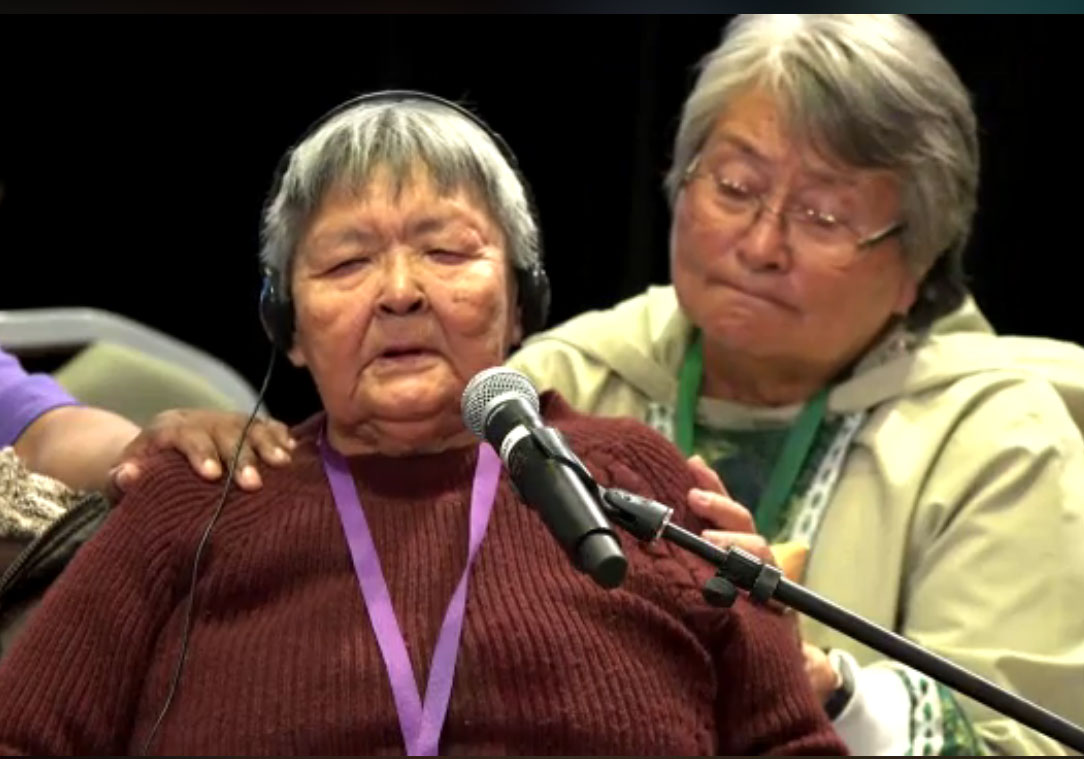 Sarah Birmingham testifies before the National Inquiry into Missing and Murdered Indigenous Women and Girls hearing in Montreal March 14, with elder Martha Grieg behind her. (PHOTO BY SARAH ROGERS)

MONTREAL—It’s been a long and difficult 31 years for Sarah Birmingham and her daughter Barbara Sevigny, who lost their daughter and sister Mary Ann Birmingham in 1986.

Sarah and Barbara were visiting Montreal for medical appointments in May 1986 when Mary Ann, 15, was stabbed and killed inside the family’s Iqaluit home.

The family has never stopped advocating for a new investigation into Mary Ann’s death. But in the meantime, Sevigny said there are many other Inuit women who have faced violence and loss—and who need help.

Sevigny, a health manager with the National Inquiry into Missing and Murdered Indigenous Women and Girls, reversed roles March 14 to testify before the commission while it hosted hearings in Montreal.

She called for more Inuit-appropriate support services in the North and for more research into the root causes of violence, in order to foster prevention.

Sevigny was only 17 when she returned to Iqaluit, alone, to find her sister’s body in a pool of blood in the family’s home. It wasn’t until years later that she realized she suffered from full-blown post-traumatic stress disorder.

“There was no system to ask the family: how can we help you?” she told the commission.

“When you’re denied care, it’s very hard to take care of yourself.”

Sevigny told commissioners that she continues to be triggered by memories of her sister’s death and other abuse she faced as a young person.

But she sought treatment in southern Ontario, where she eventually settled, and continues to receive crucial support from her husband of 29 years.

Sevigny went on to become a trauma and grief counsellor, to deliver the same kind of support she wished she had that day she discovered her sister’s body.

Inuit don’t have enough of their own people, in their own communities, to reach out to in times of need, Sevigny said. Victims need to speak to people who understand where they come from—in their own language.

Sevigny also recommended the inquiry look to the root causes of violence, and what drives people to abuse.

“It’s our job to find out what happened”

The week-long hearings in Montreal focused one day—Wednesday, March 14—on Inuit testimony.

And that gave Sevigny’s mother, Sarah Birmingham, a platform she hadn’t had before to tell her story.

Birmingham was in Montreal with her three-year-old son for several months in 1986, so he could receive chemotherapy to treat leukemia.

“I had no choice,” she said. “But I have even accused my son of causing Mary Ann’s death.”

Her young son, Lyta, later died of leukemia. The guilt and grief she’s carried have been a life-long burden, said Birmingham, who broke down crying at the commission.

“I have never spoken of this in all those years,” she said. “I have clammed up my emotions all this time, and finally I let them go before you.”

Birmingham said she has waited years to find out who killed her daughter—as a way to bring justice for Mary Ann and as a way to find closure and heal from loss.

“It’s our job to find out what happened,” she told the commission.

The national inquiry’s hearings continue in Montreal until March 16. The inquiry has a support line available for survivors of violence at 1-844-413-6649.