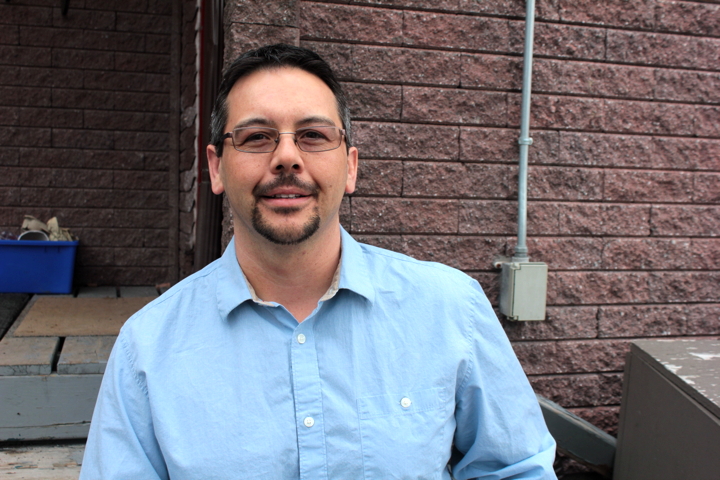 Jason Leblanc, an Inuk from Nunatsiavut and executive director of the Ottawa-based service and cultural agency Tungasuvvingat Inuit, will lead a tour of five southern cities this spring and summer to meet with local Inuit, identify what services and programs are needed and help them access federal money. (PHOTO BY LISA GREGOIRE)

OTTAWA — With an increasing number of Inuit leaving their home towns to live in the South, cities such as Ottawa, Winnipeg and Montreal are being asked to provide more tailor-made services and opportunities for Inuit.

And Tungasuvvingat Inuit, a Ottawa-based provincial social service and cultural agency, is leading a new study in five Canadian cities to find out who’s living there, what they need most and how to help local groups provide those services.

“It’s really looking at the stats we get from Stats Canada versus the reality and then connecting with municipalities. At the end of the day, Inuit are residents of municipalities and they’re entitled to certain services.”

The timing of the project, called “Increasing Urban Inuit Participation in the Economy,” is ideal.

It’s been exactly 10 years since TI did their first survey of urban Inuit in southern Canada.

That one was called “National Urban Inuit — One Voice.”

This 2005 survey, and subsequent gathering in Ottawa, was meant to raise awareness around an often ignored portion of Canada’s Inuit population, to gain more recognition for urban Inuit from the federal government and to figure out how best to carve out the Inuit share of federal money earmarked for Aboriginal programs.

Statistics Canada’s 2001 census said there were at least 5,000 Inuit living outside traditional Inuit territories in the Northwest Territories, Nunavut, Nunavik and Nunatsiavut. At the time, those southern Inuit comprised about 10 percent of the total Inuit population in Canada.

The 2006 census found that about one in five, or 22 per cent, of Inuit live outside their land claim settlement areas.

Today, LeBlanc estimates about 30 per cent of Inuit may live outside Inuit Nunangat regions, based on various reports and surveys, which could mean as many as 15,000 southern Inuit or more.

He said Ontario is probably home — at least temporarily — to about 5,000 Inuit, with about half of them in Ottawa alone.

But numbers are hard to pin down which is why TI will try to get a current, accurate picture of the southern Inuit community.

“Government moves to pressure,” he added. “You can have all the good ideas in the world, but if you can’t say that enough people need it, it doesn’t stick.”

LeBlanc will be visiting Edmonton, Winnipeg, Toronto, Montreal and St. John’s and will combine what he learns with what he knows about Ottawa.

Toronto is a new addition to the Inuit circuit, he said. Numbers are suggesting Canada’s largest city is starting to attract Inuit newcomers.

In each city, LeBlanc plans to meet with stakeholders, community groups and individuals to find out what services, if any, are currently offered and identify gaps in areas such as education, health, language, employment and other social needs.

This coming fall, TI plans to hold a gathering in Ottawa to bring together those service providers and other participants to present and validate a national report and to strategize on how to access federal money for Inuit-specific urban programs and services.

LeBlanc is hoping to create a national urban Inuit strategy that can then be “strengthened with federal and provincial partners,” he said in his funding proposal to AANDC.

After that, TI plans to continue working with groups in those cities to help them get programs up and running and hopefully grow Inuit participation in the economy.

In the past, urban Inuit have been the poor cousins in the funding mix because of larger numbers of urban First Nations and Metis. The Friendship Centre model works well as a one-stop shop for First Nations peoples, but it doesn’t cater to Inuit needs with Inuktitut services.

In fact, many Inuit in the cities rank high among their Aboriginal peers when it comes to poverty, mental illness, addiction and education needs, LeBlanc said. So you can’t just look at numbers anyway.

“There’s a danger in saying, there’s only so many people here without the full context of that,” LeBlanc said. “It’s fair to say that our numbers may be small, but the vast majority of our clients come with extensive and multiple areas of support needed in light of the environment they’re leaving.”

LeBlanc, who grew up in Nunatsiavut, plans to begin the city tour in May and June with money TI got from Aboriginal Affairs and Northern Development Canada’s Urban Aboriginal Strategy.

An April 2010 study published by the Environics Institute said that among Canada’s Aboriginal population, Inuit comprised the smallest “urbanized” number.

And those who do live in southern cities are newcomers, it said.

Nearly nine out of 10 Inuit surveyed were first generation urban residents. They were also most likely to feel a close connection to their home community with, “plans to return there permanently one day,” the study said.

Only 11 per cent of Inuit surveyed were second generation urban dwellers and about one per cent identified as third generation.

This relatively “new arrival” status likely contributes to a lack of services beyond Canada’s largest urban populations, in Ottawa, Yellowknife and Montreal.