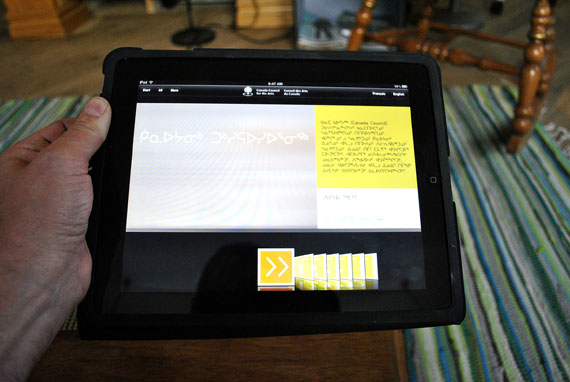 An Iqaluit iPad user looks at an app that displays Inuktut syllabics. The Toronto-based researcher, Ian Martin, says the use of the Inuit language at home in Nunavut is declining so rapidly, only four per cent of Inuit may be using Inuktut at home by 2051. (FILE PHOTO)

The decline of Inuktut language use in Nunavut is spiralling into an ever-quickening free fall and the Nunavut government’s education system, dominated by non-Inuit teachers and administrators, carries a big share of the blame, Ian Martin, a Toronto-based academic said in a report March 7.

“My personal belief is that the vested interests of non-Inuit teachers and administrators trumped the land claim-mandated rights of Inuit,” Martin said in his report.

The impending demise of the Inuit language in Nunavut is a “personal and collective tragedy” and “younger Inuit are being denied their birthright: an education in their mother tongue,” Martin said.

“Difficult as it may be for outside observers to believe, there has been no increase in the presence of Inuktut in the schools since before Nunavut was created,” he said.

Martin, an assistant professor in the Department of English at York University’s Glendon College, appears to have timed the release of his report to coincide with the tabling of the Government of Nunavut’s long-awaited amendments to the Education Act and the Inuit Language Protection Act.

In his report, Martin said the number of Inuit who use mostly Inuktut at home is falling rapidly, at a rate of about 12 per cent per decade.

“This steady increase in the percentage of Nunavummiut homes in which English is the most used—means that the percentage today is probably over 50 per cent,” he said.

“If the home language loss rate of Inuktut is 12 per cent per decade, then, by 2051, a mere 34 years from now, the Inuit language will be spoken at home by only 4 per cent of Inuit in Nunavut,” Martin said.

But he said that estimate may be too generous. That’s because of a phenomenon called “recursion,” a negative feedback loop that increases in speed over time.

“That is, the wheel of language loss accelerates as the number of speakers declines and the arenas of Inuit language use inside and outside the home dwindle,” he said.

And in high school, Inuktut as a language of instruction in Nunavut is non-existent.

“By way of comparison, zero per cent of the Nunavut high school curriculum is offered in Inuktut; the percent of Inuktut spoken in hallways has not been measured, but there is not a single school in Nunavut which would qualify as a ‘totally Inuktut environment,’” Martin said.

He said the 2008 version of the Nunavut Education Act has been little more than a “legislative dead letter” and that virtually nothing has been done to train more Inuit language teachers and that Inuktut instruction in the schools is declining.

“In the years following 2008 there have been no major efforts to increase the numbers of Inuit teachers; meanwhile the reduction of the use of Inuktut in the schools and the absence of Inuktut as a language of instruction has reinforced an English-dominant education system—not a bilingual one,” Martin said.

The GN did not create an Inuit Employment Plan for the Department of Education after 2008, a situation that Martin said is “scandalous.”

That, in turn, means that within the school system in Nunavut “a disproportionate number of (monolingual-English-speaking) non-Inuit are occupying senior administration positions and teaching positions.”

He estimates that right now, Nunavut needs at least 306 more teachers capable of teaching in Inuktut.

But at the current rate at which the Nunavut Teacher Education Program turns out graduates—about nine a year—it will take 34 years to train that many people, by 2051.

“However, with the bulk of the current 125 Inuktut-speaking teachers reaching retirement age before 2051, the actual date of reaching this target is more likely to be 2071 than 2051,” he said.

In addition to blaming a GN administration that is dominated by non-Inuit educators, Martin also blames the federal government, which in 1998, refused to fund the use of the Inuit language in government.

Money for that purpose was supposed to have been included in the Nunavut territory’s first budget, which Paul Martin, then the federal finance minister, created in the fall of 1998.

“However, behind closed doors, senior officials in the federal finance department decided to remove Inuit language of government from discussions and “address these issues at a later date.” That “later date” never arrived,” Martin said.

Martin now says that a $50-million spending item that the federal government agreed to in the 2015 agreement with Nunavut Tunngavik Inc. that settled NTI’s lawsuit with Ottawa should be spent on language development in government.

“There is a good argument to be made for the majority of the $50 million to be assigned to Inuit educator IEP and training as the multiplier effect would be felt throughout the public service,” Martin said.

Nunatsiaq News attempted to contact Martin for this story, but he was not immediately available for comment.